I just created a testlevel using anim8or and irrEdit. I think I am getting a bit better as modeller, and I learned a lot while doing this level. Here is an example shot: 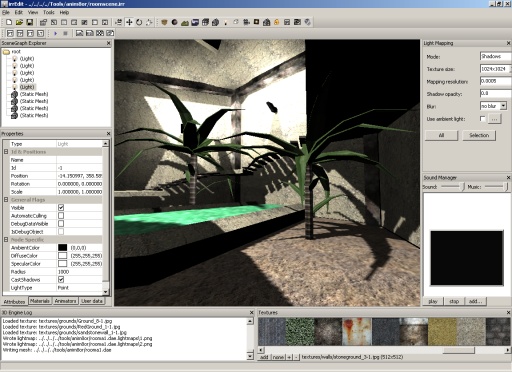 Some insights. First: I suck as artist. Totally. The only thing in that level which doesn't suck is the plant, and I've taken it from a free 3d model page on internet.
Second: The lightmapper in irrEdit is nice, but not very nice. Lightmap packing could be improved. Currently 50% of the texture space is wasted with nothing. Then, it needs some subsample options (not that hard to do, going to add this in about half an hour) and the possibility to use area lights, or at least sized point lights. Is there a technical term for such a point light?
Another shot: 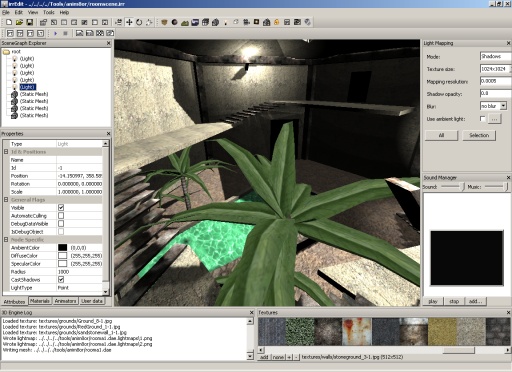 And third: I need some global illumination. This will take some more time to add, but it's definately worth it, I think.

talking about modeling... what about better support for files, which are exported by blender.
its just really sad, that the x-exporter from sdk gives errors in blender and that you cannot load an .x-file in irrlicht which has been normaly exported by blender. ";;" material-list error usw.

would be nice if you could fix that and actualy find a good way to bringt a blender-model into irrlicht ;)

why not make a tutorial which is about exporting and blender object into irrlicht and animate its bones etc.

Maybe will be useful for the global illumination implementation.
http://freespace.virgin.net/hugo.elias/radiosity/radiosity.htm
almighty
Quote
2006-09-28 14:33:00

What about having irredit running at least with linuxwine?
I've tried also configuring software rendering under windows and then
rebooting but it doesn't work. I don't understand where it stores the configuration about software-rendering, hoping that in this way irredit could run with wine. Very good, anyway. See also delta3d/stage for some ideas about a editor :)
stef_
Quote
2006-09-28 21:49:00

I suck big-time as an artist too. This is what puts me off from starting experimenting with Irrlicht. I did try out the tutorials (not all though :| ) but after that, when I wanted to try my own stuff, apart from loading different Q3 levels, I was lost on what to do. I was clueless on how I would procure nice models, so .. that was kind of a put-off. Will update you when I finally get down to writing a game with Irrlicht.

C'mon Niko, you're not that bad! In fact your room is more cool than the palm trees.

Hi, i'am usig irredit, but i have a lot of problem. I inport .3ds mesh, and put the textures in textures forlder, but after i can'apply this one to the object. When a make a room in 3ds and inport this one, irredit crach. May you help me, or send a file with a room in 3ds format thath i can inport in irredit? It could be very usefull for me. Thanks a lot, excuse my english ;-)
Angelo
Angelo
Quote
2006-09-29 12:43:00

some file support will be improved in the next release (hope soon), especially 3ds support. I'm also going to release a linux version, if possible. Not sure how this will work with the 'not yet open source'-distribution, but lets see :)
sure, please send the file which causes a crash, would be very helpful.
niko
Quote
2006-09-29 16:11:00