'Dog' just sent me a mail with the following text:


I’ve just downloaded the irrlicht 1.6 build, I compiled the Helloworld example and started it with debugger. I pressed F5 and just waited the window to appear. Of course nothing showed up, instead I’ve got this nice window: 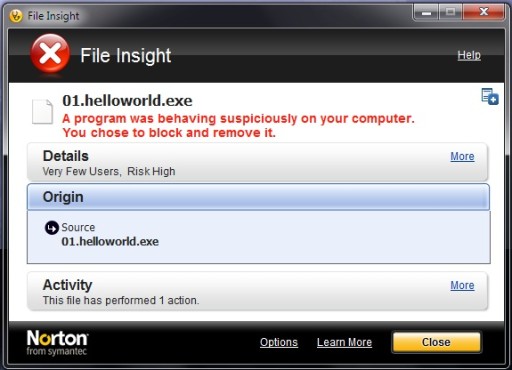 Why in the world would one use Norton? It's the root of all evil itself. I guess this problem is one of the less severe ones, data loss and computer lockups are the real fun for Norton.
hybrid
Quote
2009-11-06 15:30:00

Finally they're using whitelists instead of blacklists! I knew the time would come...
They kept getting slower and slower because of the size of the fingerprints... ;)
Tobias
Quote
2009-11-06 18:58:00

Classic example of PEBCAK. The first thing any reasonable user does when he/she gets a new computer is to remove everything labeled "Norton *" or "McAfee *". Although sometimes this wrecks your whole system, since these morons can't even write a decent uninstaller routine.
Michi
Quote
2009-11-06 19:50:00

No. Not everyone. People without a minimun knowledge (don´t take it personal if you just like norton) choose it by it´s famous name or just because it came for free trial on their computers...
technoinside
Quote
2009-11-07 15:24:00

its just heuristics acting up again. few weeks ago there was a thread on the forum about Kapersky doing the same thing, took a few days after he submitted the sample to them for them to clear the error
sRc
Quote
2009-11-07 21:33:00

The point is that Norton's security software is mainly useless regarding the security in Vista or 7.
But guys, most of you are mismatching Norton's Security software and Norton's antivirus software.
I'm not a Norton zealot and I agree there are problems with it, just as with any other software of the same kind,

but IMHO, just thinking that you're clever or smarter by discrediting other's software is a big lack of humility and i think it's wrong.

I'm only using NAV and never had any problems with it. I'm working with computers for almost 20 years and I helped thousands of people throught my jobs, i think a have a rather good knowledge of what am i doing, so judging a person knowledge about the software he is using is also, i think, a bad idea.

By submitting this picture I didn't wanted to create a software war, i just thought it was funny to see that the Norton's new technology saw a threat when visual studio launch the Irrlicht hello world example.
But maybe i'm also wrong to use Microsoft's Visual Studio or Windows 7 ??
Dog
Quote
2009-11-08 15:44:00

Norton is no more a powerful tool !! it came free with my new laptop and i chose not to install it Ok? try Avast personal or Avira personal ... free and updateable with no limits
just disable the active scanning or whatever it is called during the debug by right click on systry icon
jim east
Quote
2009-11-23 13:36:00