People have quite different opinions about the Irrlicht Engine documentation. Some are saying it is very good, some even tell me that Irrlicht is one of the best documentated 3D engines and some say that the documentation could be improved. So I'm going to extend the documentation with more examples in the future. But I also thought about adding images, like this: 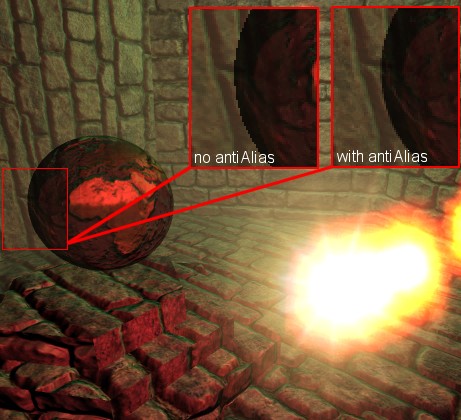 This shows anti aliasing, a new feature in the next version, 0.11.0. I don't know yet if it is a good idea to add those images and screenshots. But it would be fun to do it, and I think it would make the documentation a lot more interesting. :)

Wow! I think it is great idea to show feature or explain something in screenshot;). One more plius is that documentation will look much better, not only plain text;). Of course, I missing some examples of code too.
Ittallas
Quote
2005-07-06 11:00:00

Personally I would love it though it might me nice to have an option to turn them off (or rather have one with and one without) because they are great when you need them but just in the way when you don't.
TSM
Quote
2005-07-07 05:11:00