If you know Babylon 5, the best science fiction series ever, then you probably have heart of Crusade (no website, see below why). Crusade is a spin off TV show from Babylon 5, and very unpopular. It is so bad that only 13 episodes have been produced, and that - although it was fully dubbed, no TV channel in the german area bought it. Here in Austria, you can only buy the small DVD box to be able to watch it. Positive aspect: The box is very small, but contains the full series. :)
I've recieved one copy for xmas, and now have watched the series. My conclusion: It really is bad, nothing compared to Babylon 5. The story is boring, the characters a bit ridiculous. Who had the strange idea to put a thief, a magican, a scientist and a captain into a space ship and create a tv series from that? Strange. At least, the series has a lot of references to B5, and you even get to see two characters from there:

The only exception is the last episode, a strange persiflage of the X-Files series. Two aliens get to the Excalibur, and behave like Mulder and Scully. Even a third alien who works for the alien government later appears, who starts smoking at the end of the episode. Here's a shot of all three of them: 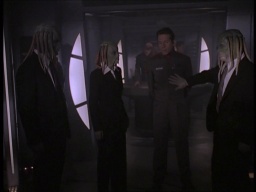 Too bad that B5 ends this way.

To everyone who like REALLY good SciFi Series.... go get Firefly. I mean it. Now. Seriously, it's amazing how good it is. I read about it and went to get the series (unfortunately, it was canceled after just one season... but as we all know, that can be a sign of quality). I was hooked from the beginning. This series rules SO much. I gave it to my friends, and they ALL(!) got hooked immediately too. That's right, I have yet to find a person that didn't like Firefly. People either love it, or they don't know it :D
TheGolem
Quote
2006-01-17 21:52:00

I've got to agree with TheGolem about Firely!

This is the one to see for every SciFi fan and others too as it is really funny, well done and with an amazing universe and actors. In my experience as you correctly said: "People either love it, or they don’t know it"!

Unfortunately, it hasn't been canceled after one season but only 13 episodes by FOX the butcher. But the movie "Serenity" does bring many answers (an some might say conlusion) to the show, which is already amazingly enjoyable by itself.

b5 was pretty good but imo the best sci-fi ever is either star trek voyager, stargate sg-1 or lexx. firefly is a bit too all-american-space-cowboy for my tastes, but it is enjoyable. the new battlestar is pretty good, and The 4400 is also worth mentioning. dont bother watching earth final conflict (i just finished watching it), its on par with Crusade but ran for 5 seasons.
bitplane
Quote
2006-01-20 02:12:00

Crusade rocked, had it continued it would have the best thing out of the B5 universe(way better than Legend of the Rangers), and any show that has a mage as a main character can't be bad.

Firefly was very cowboy for me too, watching the new Battlestar.. but it is *SO* like "24", overly religious and in danger of becoming seriously yawnsome if it doesn't shape up quickly.
EnglishBloke
Quote
2006-02-05 07:03:00