I am developing a game named Business Magnate. This post is part 4 of its development blog (other parts: part 1, part 2, part 3)

One of the most time intensive parts of creating tycoon games or simulation games in general is also the most boring part: User interface. It is hard because the user interface needs to be functional, good looking and easy to understand at the same time. 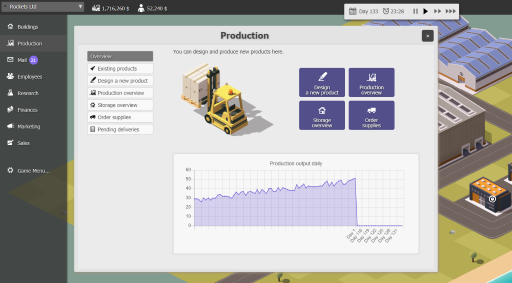 And in addition, for the type of game I am working on: It needs to be able to update itself in realtime - everything can change while the dialog is open - and it needs to be able to do this quickly, without much framedrop. All togehter, this is a terrible, terrible combination. 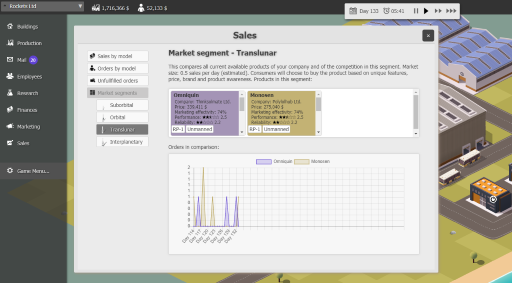 Nevertheless, Business Magnate has a total of 23 dialogs (including subdialogs) like this. I am quite happy that - as user tests reveal - most of them seem to be very easy to use and understand, but I think I could still improve some of them. But on a side-note: If I ever mention that I want to write another game like this with that amount of UI - please someone shoot me.

I also had to add another, quite interesting feature, related to UI: When I played through the game the first time with a "Rockets" business type, I was so busy adjusting production settings, doing marketing and research, ordering materials and so on, that I never had the time to watch my rockets take off, although I really wanted to. I simply always missed the rocket launches. So I implemented this thing here: 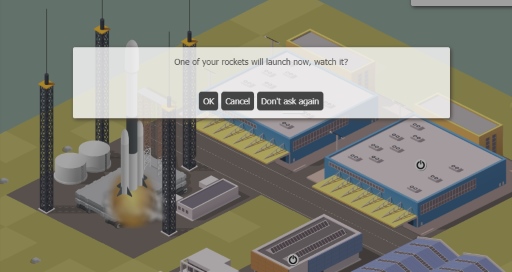 This looks like a simple message box, easy to add, right? It is actually a bit harder: The game needs to detect that you won't see the launch - maybe because you are busy in a dialog, have a too fast gameplay speed or watching somewhere else, and only THEN ask for this. Then it needs to be able to scroll and zoom to the right place, and it also needs a setting in the options so that you can turn this feature off if you think it is too annoying.
But after all this, it was worth implementing this: Watching the rockets you designed, marketed and sold, lift off into space is quite a reward - I wished there was a similar event for other business types such as cars.

Anyway, the game is now nearly finished already and will release in less than 4 weeks on steam. I hope that everything will work out until then. A lot of testing still has to be done.

Since this is a one-man project (apart from the artwork i believe), i wonder, do you think very deeply about what you want to make and write it down in detailed specifications? Or do you just start coding it from the ideas in your head and tweak/adjust/change as you go along?
Lenx
Quote
2019-02-01 20:00:00

Yes, I think it would be very difficult to create a complex game like this without a plan. I usually have game design document and lots of notes of ideas and stuff to try out during development.
niko
Quote
2019-02-02 05:47:00

Hi, I would like to see those notes and design documents, do you use special tools, design concepts or templates? I also think that it would be great to have these game development posts (maybe a bit extended) in the CC help section of ambiera.com. thanks.
Douwe Dabbe
Quote
2020-06-08 17:09:00