Four years ago I started my own software company and named it Ambiera. I had no experience on how to run a business before this but quite a lot of programming experience, so I thought "what could go wrong?". Fortunately, most worked out nicely since then, and I've learned quite a lot stuff. So if you are thinking about starting your own software company, here are a few advises for you: 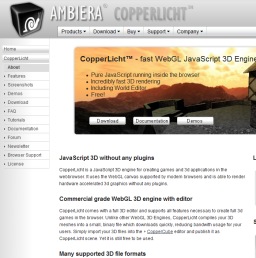 People lie
People will try to rip you off wherever they can. Especially when it comes to money. They will pay you late or not at all. They will lie straight into your face. "The check is in the mail" and similar is just one sentence you will begin to hate. So be prepared and don't believe people. They will always try to rip you off, no matter if you think they are your friends or partners. (addition: But of course, not all are like this. In fact, most business partners for me were usually quite professional and honest)

Taxes are high
Remember the middle ages where they had to pay the tithe (german: Zehent)? That was a 10% tax. Today, for example in Austria, the value is currently at 70% (50% income + social security, and 20% vat). And it's getting higher, thanks to the politicians and the economic 'crisis'. Anyway, you will probably have to pay this, and especially for a startup company, those taxes are incredible high which is not that easy in the beginning.

You are responsible
Since you are now on your own, there will be no one to keep you motivated. Nobody will tell you that you need to work X hours per day and focus on the most important things. Personally, for me this never was a problem, but I know that a lot of people tend to get lazy and have problems motivating themselves to work. This is a major show stopper, so if you know you are that type of person, better don't create a startup.

You will not be successful
Despite creating a great product or implementing a unique feature, you will probably not be successful. Take a look at the market: In most cases, the most successful software is not the best software. There are a lot of articles and even books about why that's how it is, and it's not easy to explain this phenomenon in a few sentences. But simply keep this in mind: Probably not even 10% of all software created is commercially successful. That means that there is a 90% chance that your software will fail. (source? [[citation needed]] ) While I worked on Ambiera the last years, I've seen 9 startups founded by friends and people I know. And 6 of them failed so far.

The competition is not sleeping
Regardless of what you are doing, there will always be companies in your sector which do a similar thing but have more money. And they will use it to crush you, and probably they won't even notice while doing this. They will have bigger advertising budgets, more managers, better contacts. It's difficult.

Summarized, it is not that easy to launch a startup and keep it running, there are a lot of obstacles. But once you managed to overcome them, this is where the fun begins.
If you need some advice, share experiences about your own company, want to do a strategic partnership with my company Ambiera or similar, don't hesitate to contact me. :)

I do agree and I know them because I am running a company myself. However, there is one simple solution: Do not rush into exiting your current job, and starts your own. Start by doing the business part-time, and ONLY when you can ascertain cash flow and confidently predict the future jobs (and money), then you quit your job. And job (or contract) is not a contract unless there is a black and white in there, and you have received the first $$ downpayment. And if you have secured the job, doesn't mean you will get all the money (bad client, etc).

It is complicated, but despite of that, if you are hard-working and smart (and with a few lucks) you will be end up with good clients who will pay what has been agreed on time.
syedhs
Quote
2010-09-17 08:44:00

Another comment about "People lie": I just started to work as a freelancer, but I only had one customer who did not pay at all (I sued him, and after all he had to pay, but that needed some time of course) and one who paid to late (at least including "late interest", but that's much too low). The other 8 were quite fast, I have even two customers which always pay on the same day on which they get their bills. Maybe I am in luck?
Andi
Quote
2010-09-17 08:48:00

My experience founding several SW companies agree with this but the competitor bit is more subtle - being SW only provide very little "sustainable competitive advantage" compared to SW+HW or HW alone. Additionally the margins for SW only suck compared to SW+HW or HW alone as well. This is what our company finally realized: we decided to create HW that aligned with our software products and both our margins increased radically and our net revenue increased by a factor of 10 and seems to want to keep rising. This is in some ways what helps Apple be successful compared to Wintel HW only or Microsoft SW only.
JG
Quote
2010-09-17 10:14:00

Sad to hear you've had so many people rip you off. I've been independent for the same amount of time, and have had only 2 bad experiences (luckily they were contained to < 1000 each). I can honestly say that I'd be happy to have a beer with almost all of the people I've worked for over the years.

My 2c is this: never work for academic institutions. They're incredibly bureaucratic, people involved often have no idea of business realities, and they're used to having an endless supply of cheap labour (students and post-grads). Recipe for disaster...
steve
Quote
2010-09-17 13:21:00

well, getting computers and similar for 20% less doesn't help much there, it's not a big amount.
@steve No experience with academic institutions yes, but sounds bad. I haven't had that much bad experiences yet, most were very positive as well of course. Didn't mean to make the article sound like every business partner is bad out there :)
niko
Quote
2010-09-17 13:44:00

Okay, so I agree, and disagree.

People will lie. Welcome to planet Earth. I'd add "People will steal, and call it their own" and suggest that you spend 5% of your time protecting your intellectual property. Those "liars" will easily make the jump to theft if (a) it's easy and (b) they can rationalize it.

Taxes are high. They will only get higher. Your own software company allows you to generate more income than a day job. Every try to get your boss to pay you more money for doing more work? Doesn't happen.

You are responsible. How is this different than a 9-5 job? Screw something up and now you have no job.

You will not be successful. Hmm.. Perhaps YOU will not be, but some of us are quite successful. Mayne YOU should adjust your expectations so that just showing up is a success?

The competition is NOT sleeping. So go somewhere that has no competition. Don't say no such markets exist, 'cause I know of at least three (but I'm not going to tell you what they are :-))

As a startup, you may want to invest some time in setting up a 'general terms and conditions' document (or copy one from the internet), containing terms about payment and liability. This will help you if the customer refuses to pay and you have to go to court.

Think about insurance: liability and disability. It will vary from country to country if you need this, but will definitively be expensive.

In over six years, I've had only four people stiff me, and only one for over $500. I've had some who pay too slowly, but a little timebomb in the code usually cures that. Lately I've been busy enough that I can fire the clients who don't work out.
Jon Peltier
Quote
2010-09-19 15:24:00

"'Trust and you'll be trusted,' says the liar to the fool" (Type O Negative)
...made the same experience. But all in all, I guess you have to go through the process.

Hi, Sorry to hear you had such a bad experience. You bring up a lot of good points, but as another person mentioned try getting your boss to pay you double when you work three times as efficiently as your colleages. With risk comes reward. Hope things change for the better for you. :)
R.Bianco
Quote
2010-09-20 07:00:00

it's also possible to start smaller. it's a good idea to do it part time at first and as a small business you don't have to pay vat in austria.

i have mostly made good experiences with my customers. i only fell for a scammer once. he managed to get a job at a company even if he had no clue about anything and then he acted as a company himself and gave out contracts for the work he was supposed to do. of course he never payed, made a lot of promises (i was so stupid!) but after a while i figured out what he was doing, he got fired and now i regularly get nice projects from the company he worked at. :)
hugo
Quote
2010-09-20 23:45:00

seems like startup in america is far easier and better, taxes about 33%, Obama pushing Made in USA brand, tax cuts to companies employing mainly Americans, etc. etc. But that has been like in US in past also.
kinjalkishor
Quote
2010-09-23 16:34:00