We attended the Rammstein concert in Vienna this weekend, and I was quite surprised: I saw a lot of concerts of similar bands already and Rammstein took all efford to make it a great show. I would even say this was the best concert I've ever seen and I'm not a big Rammstein fan. 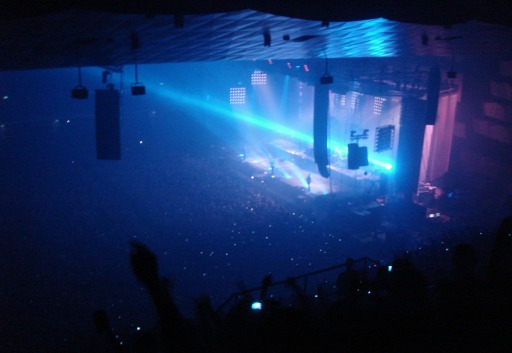 With 15000 people in the hall and a ticket price of about 70 euros, and estimating that Rammstein gets out at least 50% of the money, they would have earned about half a million euros (!) with that concert yesterday alone. It seems to be good to be a rockstar. :) But they really worked for their money, doing as many new effects and stunts each song as other bands would do their whole concert alone. The atmosphere was great and the beer as well. Also, I expected the concert to be filled by teenagers, but it appeared the average age of the fans was about 30.

So if you have a chance to grab a ticket to a Rammstein concert, I'd suggest to take the opportunity, you won't be sorry.

I wanted to buy a ticket for their upcoming show in Paris, but I was too late ;) However, I now have difficulties to go to shows with so many people, regardless of the quality of the band (except for outdoor festivals). I'm quite used to small venues with less than 1/1àth of the crowd.
mithrandir3
Quote
2009-11-22 12:41:00

Did they play their new stuff? Rammstein is known for being over the top, but their latest album still surprised me.
Michael
Quote
2009-11-23 23:41:00