The next version of CopperCube will include character animation, but because most skeletal animated 3d files you find on the web include only one single animation track which includes all kinds of animations, I implemented a very simple animation editor (the panel on the right): 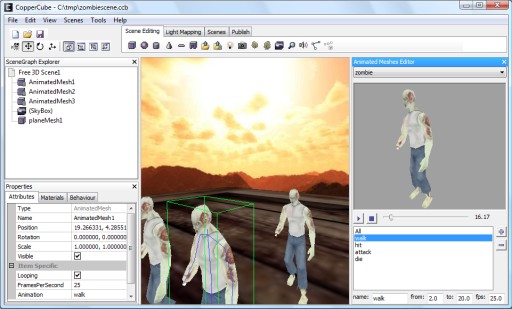 The zombie model has been created by Psionic3d.
With that editor, it is possible to cut animations into smaller, named animations and also set an animation playback speed for each animation. So for example for human like game characters, it would be useful to define the animations 'walk', 'run', 'attack' or 'die' in there. After doing that, you'll have access to these animations in all actions and of course from the scripting interface, be it ActionScript or Squirrel.
I'm not sure if the interface of the animation editor is very intuitive, but I like it for now.


Note: You can download CopperCube right now. If you would like to get a mail once a new version of Coppercube is released, subscribe to the Ambiera Newsletter:

Never said something like this. irrEdit seems still to work great with the lastest Irrlicht version, but should this change with Irrlicht 1.7, there will be a new irrEdit version as well.
niko
Quote
2009-10-30 12:36:00

WOW the animation Editor looks really cool.
I wish most of the features on coppercube where on irrEdit.
Render animation sequence to avi/gif would be really cool. Just an idea.
leo
Quote
2009-11-01 01:08:00

@david: I haven't that much Mac OS X requests for coppercube yet, but it would be possible, yes. If I get more requests, I'll probably make one.

About irrEdit/CopperCube features: Yes, that's the pity of free software vs. commercial software: I don't get any money for irrEdit and I guess nobody would ever pay me to add cool, time intensive features to irredit. Maybe an option would be to make coppercube also edit and export .irr scenes (replacing irredit). Technically this would be no problem, I guess.
niko
Quote
2009-11-01 14:37:00

I hope that you continue IrrEdit. I like the way it is (don't use the animation features but have animations calculated by ODE), and I love writing plugins for new scene node types for IrrEdit. Really easy to extend it.
Brainsaw
Quote
2009-11-02 07:25:00

Correct me if I'm wrong, but isn't the Coppercube editor based on the same source base as irrEdit? Wouldn't it then be possible to port written frontend features of this editor (such as the animation editor) to irrEdit with minimal effort?

Don't get me wrong, I am not trying to cut you off from your source of income ;) It's just that Flash development isn't my cup of tea. I prefer working with Irrlicht. Using irrEdit then, it is sort of sad to see cool features not being added to irrEdit but to Coppercube instead...
Tazo
Quote
2009-11-02 15:34:00

Coppercube started to be based of irrEdit, yes, but it has been highly modified since then, and isn't compatible at all anymore. But of couse, with a slight amount of work, it would be possible to write out compatible .irr files, that's right.
niko
Quote
2009-11-02 16:37:00

I guess that would be a nice option for you: include the feature to save .irr files in the full version, or maybe create a "light version" (little cheaper) that does only save .irr files ;)
Brainsaw
Quote
2009-11-03 07:11:00