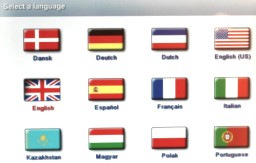 I wonder why there are no symbols or icons for languages at all. Would be really useful.
Maybe this is because most people don't think about languages that much. Good example: Did you ever try to change the language of Google because it preselected a wrong language for you? Good luck: 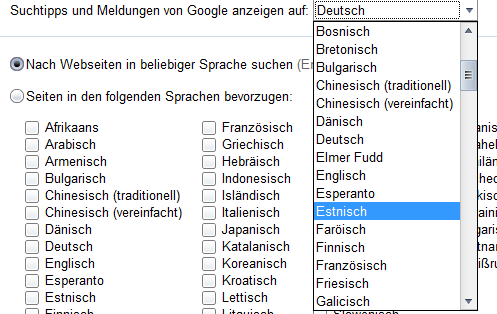 The language names are written in the language which is currently active. If google selected 'chinese' for me here, I would have had no chance to switch it to English or German at all.

Seems like the flag method would help in the second situation, but it would be ideal to have all the flags for all territories. That way there is no need to read the words. You do have to know you territory's flag though ;-).

Flags and country codes don't work because there's another problem - countries with sub-communities with different languages like Canada and Belgium.
steve
Quote
2009-10-28 15:14:00

That's why google lets you switch the language on the frontpage when you type in a local url like google.es ;)
Although one might wonder why they don't display the according language by default. Who wants a german page when he types google.es?
Telepath
Quote
2009-10-28 16:45:00

of course you could use the ISO language codes (which everybody knows by heart of course), or better yet, the IANA ones, because then you wouldn't have a problem with Klingon as well.

OTOH: why would you want to select a different language in google? I suppose you could just enter your search terms and press enter regardless of whether it says "google" or "el goog" on top of the page...
xaos
Quote
2009-10-30 10:50:00

The major problem with google is that according to the set language it gives you VERY different search results (And most likely simplified chinese brings up less results than traditional chinese)
sebastian
Quote
2009-11-07 07:57:00