To make it possible to create more interactive 3d scenes with this editor, I've been implementing an Event/Action system recently for CopperCube.
The basic idea is that it should be easily possible to add more interaction to a 3D scene without the need to program anything. Example: You want a sound to be played if someone clicks on an item in your 3d scene. Another example: If someone walks into the vicinity of a special 3d item in the scene, an info text will be shown.

To achieve this, CopperCube 1.0.6 will include some extensions to the behaviors of scene nodes (In Irrlicht, these are called 'Animators'). The editor for this will look like this: 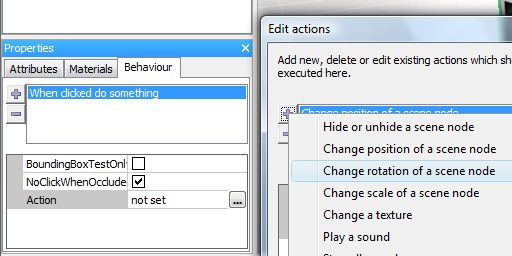 The behaviors of a scene node. Define animations, events and actions.

I already implemented actions to make it possible to change the position of a scene node, to rotate and scale it, to make it visible and to change its texture, to play and stop sounds, open a website and to execute java script code. I guess with this first basic set of actions, it is possible to create a lot of interesting applications already.

I hope to release the next version of CopperCube with these actions and events within the next week, let's see. I'm open for suggestions and ideas until then :)

That's great for some quick prototyping, too. The good thing about such systems is that, once setup, it's easily extensible. It all falls back to a solid design pattern, doesn't it?
matt
Quote
2009-09-15 19:29:00

Nice! Some animation action could be cool, key frame, rate and so on.

yep, it was a bit of work to write, but now you can easily add new actions and events.
@daniel: key frame animation is on my task list, but this event/action system is a bit different still.
niko
Quote
2009-09-16 15:36:00