Why OOP is great

Last week I worked a bit on Coppercube again, my 3D engine sideproject which also renders 3d realtime graphics in the flash player. Because the Flash9 deployment target already works, I wanted to implement the windows target, basically the editor should create a windows .exe from the 3D scene. Before starting to program, I roughly estimated 6-8 hours of work to finish it. But in the end, it only took me 20 minutes. 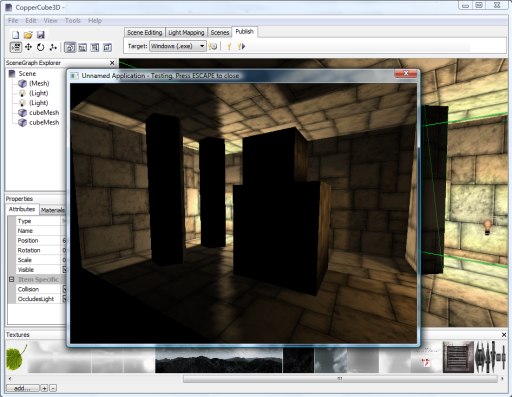 I was surprised by my own speed of work :) The advantage was that the whole already exsiting project was written in nicely but strictly designed OOP (in a similar way I used when creating irrlicht), and I only had to subclass two classes and write about 200 lines of code. The beauty of OOP kicked in, and 20 minutes later, I had a bug free, working win32 player and an editor which could create interactive realtime 3d applications for both flash and windows.
Sometimes, I really like being a programmer. If everything would be that easy :)

btw: I really like Irrlicht. Easy to extend, easy to understand and (really important for me) easy to get a first running application up. When I discovered Irrlicht it took me about 20 Minutes and I had a running 3D program.
Brainsaw
Quote
2009-03-24 07:27:00

lOl coppercube looks alot like irrEdit except for the tabs. Which i like. I am hoping coppercube will replace irredit. Coppercube looks way better IMO :p. plus it will be hard for you to maintain both.