(no spoilers) Some weeks ago, I bought Bethesdas Fallout 3 although I initally hesitated to do this because I considered it just to be an Oblivion with different graphics. (Not that I didn't like Oblivion, I loved it.) 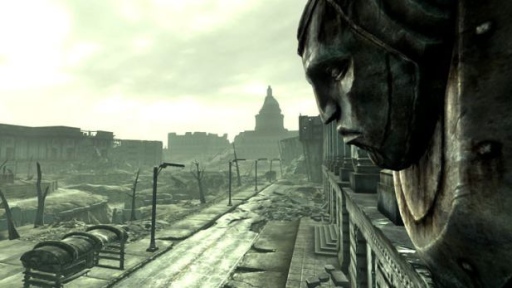 But after playing it for some hours, it turns out that Fallout 3 has some quite nice ideas built into it and it is fun to walk trough the destroyed city of Washington DC, and fight mutants and raiders during a virtual sightseeing tour. You'll also discover a lot of references to other games and media [4 8 15 16 23 42, anyone?]. It still feels a lot like Oblivion, but this also has advantages, like the extremely short time when loading and saving game states (would be interesting to know how they are doing this from a technical point of view, btw) and the huge, detailed world. Hope to finish this game soon, but it will need some time because I'm currently a bit short on spare time.

Fallout 3 is good for about 20 hours. After that the "oblivion repetition" comes into play. The game is pretty easy if you make your character right(charisma is a useless stat btw). There's no reason to explore since by the time you're level 15 you have all the money/ammo you'll ever need. If they had boss fights or a better/more interesting item system then exploring would be fun.
Joe Smith
Quote
2009-02-16 19:50:00

If youa re having crashes or water problems in Fallout 3 on a nvidia card in Windows Vista roll back to "180.48" , which is the last set of stable driver set till now. This also corrects loads of UT3 and Mass Effect crash.

I felt Fallout 3 is more tightly focussed then oblivion. For ex. no one disturbs me in Oblivion, some people disturb me in Fallout 3, and combat finds me in Gothic 3(use v1.6 community patch, if u are still playing). Wasteland is smaller than Oblivions world, though.
A good difference is more no. of better choices and guuns instead of swords. Though the choice or dialogue system is not deeper like NeverWinter Nights, still it is afirly good and of Bioware quality, something Oblivion lacked at.
Mass Effect is also one very good rpg if u like SW Kotor.

And wasteland really looks like wasteland. Al in all Fallout 3 is so good game I kept playing it and cannot leave, it is interesting and funny.
I also bought it thinking it was oblivion with guns but it is different somwhat but in a nice and likable way.
kinjalkishor
Quote
2009-02-19 09:05:00

Check out this action RPG being made on CryEngine originally as mod, but got an evaluation license of CryEngine2, and very possibly get published.
light spire : fortunes web