My recent unusual selection of a new forum software

Until a few days ago, the forum software I used on my company's website was the E-Blah Bulletin Board System, which is implemented in perl. But because of some technial details and other cumbersomenesses like that the administration panel of that board is filled with quotes and instructions from the bible (?!), I wanted to replace it.

Unfortunately, I didn't find a forum which I really liked. It had to be open source or free, lightweight, should have been unpopular enough so that its security flaws are not too often targeted by hackers and spammers (had some experiences with this already) but have decent enough features to fully replace the current eBlah sofware, a nice editor with code tags etc. In addition, it should be possible to import the old forum somehow. 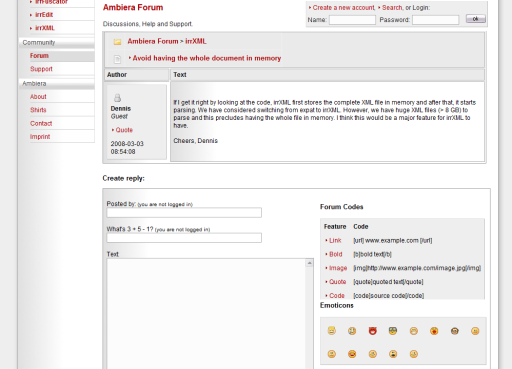 So after some hours of evaluating several software (the winner so far was Phorum, btw, which I am using on my RGP game website already), I had an idea: Why not writing my own forum software? Of course not, this would be quite some work, right? But then I remembered that I alread did something like this: For our small dating website bienen und blumen, I already had implemented a working forum (And somehow I had forgotten this). So I only took this piece of software and refactored it. I added some new features like

And voila, the perfect forum for the ambiera website was born. Try it out, if you like
to. One feature still is missing - highlighting forum threads with unread posts - but for basic support request handling it is pretty ok now, and I think, and I can add this feature later if at all.

Suggestion: Get rid of your math based CAPTCHA and use http://recaptcha.net/ instead. reCAPTCHA is extremely easy to use, plus it is per definition not crackable.

Read a little about it, and you will see why.

IMHO, without sounding too much like a commercial, there is really no reason at all why anyone would want to use a different CAPCTHA than that.
Tazo
Quote
2009-02-09 17:03:00

I think it's ok that people believe the things written in the bible (although I don't), but I think something like this shouldn't be placed in the admin interface of any software. If the author would have used quotes from the Qur'an instead, I think some other people would have protested :)

Writing of own forum software is the best way by my opinion.
Yes, usually such task spends some time and efforts, but you will be able to implement your specific features related with relevant scope.
etcaptor
Quote
2009-02-10 04:02:00