I thought I never used Facebook in my life before and that I could live without it. I am at least
registered at StudiVZ already, the primary social network in the german speaking area. And StudiVZ already sucks and is quite useless, so I thought after all the bad things I've heard of Facebook I really don't need to get in touch with that thing at all. But looks like I am wrong: Because I didn't see Facebook in my life before, I - as well as about 90% of all other users as well - didn't realize that StudiVZ seems to be a perfect rip-off of Facebook - so I kind of used it already. Hilarious, just take a look at the images, the only difference seems to be the color (red vs blue): 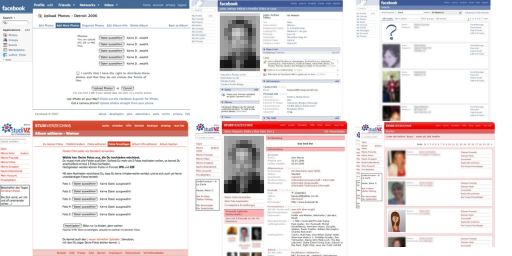 People are reporting that StudiVZ has exactly the same features as Facebook, and some paths of StudiVZ's PHP based implementation even seems to be named 'fakebook'. Well, Facebook already sued StudiVZ because of this right now (well, the real reason is of course because Facebook still has only 1 mio users vs. StudiVz's 6 mio users in this area). StudiVZ already replied that they still think it's ok what they are doing. Nothing unexpected from a company who admonished other websites with the letters 'VZ' in their domain name for their 'mark' which wasn't even fully registered back then.

Only social network I'm on is Xing, for professional reasons. StudiVZ is the devil, and I'm never gonna go near it. Even more now since I'm not a student anymore, and even though I seem to be the only one in the german speaking area, I for one find it hilariously stupid how many non students are registered on a social network which even has its target demoscopic (students, go figure) in its name.
Tazo
Quote
2008-07-22 01:52:00

What are they suing for? Is it actually illegal to rip off the design of a website? Just curious as I would be rather surprised if that would be the case. I would suppose that they should be fine as long as they don't actually copy php-sources or images.
Otherwise I see another wave of legal actions rolling towards webseite owners (lets face it ... 99% of all websites have no original layout).
CuteAlien
Quote
2008-07-22 10:41:00

I am already in facebook.
I even have developed a few applications in facebook
my biggest is Social Chatrooms (http://apps.facebook.com/profile-chatrooms/)
Well facebook is good if you a developer or if you really have friends who are really active.
In fact i think if you could develop Darkness Springs to work with facebook you could really get lots of users.
leo
Quote
2008-07-22 18:45:00

I always thought Facebook sucked but was a necessary evil.. Recently they added a chat-bar to the bottom of the screen which is enabled by default, which makes it much more useful for keeping in touch with people who are either scared of or have no idea how to use an instant messenger!

I really hate their privacy policy, by using it you allow them to gather information on you using any other website, not just Facebook! Surely this isn't legal (at least here in the UK we have strict data protection laws) but it won't stop them from spying on you until it is tested in court!
Gaz
Quote
2008-07-23 21:58:00