I've outed myself as Opera fan on this blog already, and I am very happy that Opera version 9.5 has been released today. The browser has a new default design now (not my personal favourite) and a lot of new nice features, but the most interesting thing about this release is for web developers: Opera 9.5 includes a preview version of Opera Dragonfly: 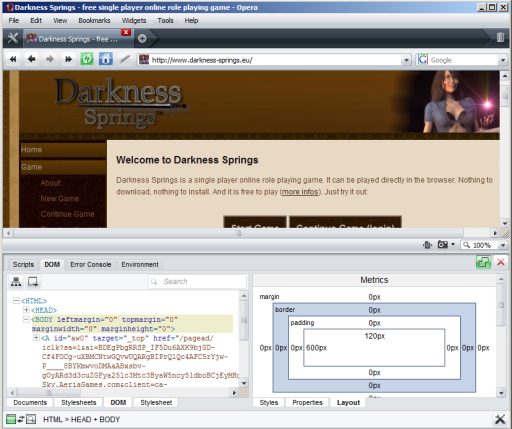 Open any website and click Tools -> Advanced -> Developer Tools, which starts up Dragonfly. It is a JavaScript Debugger, CSS and DOM inspector, and includes an Error Console which not only prints JavaScript but - very useful for me personally - also CSS errors. BTW; Dragonfly is open source and uses the BSD license. Looks like Opera will continue to be my favorite web development utility :)

It looks an awful lot like Firebug, which is my current favourite. I love that in Firebug you can tweak the CSS and HTML on the fly to experiment with things, very handy when dealing with pesky layouts.
steve
Quote
2008-06-12 15:17:00

Posting this from Opera 9.5! The error console has been around for a few versions, actually, and they've had Developer Console and DOM Snapshot bookmarklets in their developer section for a while, too, but Dragonfly's JS debugger is a very welcome addition.

I swear 9.5 starts much faster than 9.27 when you have lots of tabs open in your session. Also, latest Flash works in Linux again. (Adobe sneaked incompatible features in with a security release) It'll take a while for me to get used to the new design though.