Darkness Springs now open to play for everyone!

Just minutes ago, I unlocked the role playing game Darkness Springs to the public. The game is now in open beta and can be played by everyone. It is not even necessary to register, sign up or similar. Simply go here and click the 'play' button. 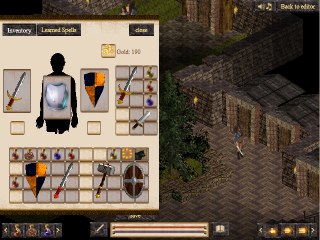 The game does not contain all content of the full game yet (will be unlocked in the next weeks), but it should already contain something between 4 and 6 hours of gameplay, depending on how you play. Happy playing.
Any kind of feedback (via the support form, by email, in the comments of this blog or in the game forum) is welcome.
Update: Links corrected now, the game should work now.

Hmmmm, the game isn't loading for me. I have Adobe Flash Player 9 (the debug version that comes with Flex Builder), and when I right click it says "Movie not loaded...". There's just a black rectangle where the game should be.

Does not seem to work with Opera 9.27..
I only get a black screen..
i've got Flash 9 installed & working fine with other pages.
Also, when i open that page, opera is complaning about some non valid sertificate and a "warning" that someone might try to spy on me. :P
OneMoreInThisWor
Quote
2008-04-09 18:28:00

I squinted my way through the first dialog after trying to go through the gate (that clearly appears open) then killed a skeleton, went up the ladder and BOOM! I get the message below.

The application Opera has performed unexpectedly and Windows must now close the program.

yep, zooming is not supported (yet).
how to walk faster: http://www.darkness-springs.eu/faq.html#slowwalking
@tsm: It's just a flash file, so I am not responsible for your browser to crash :) But you have two options IMO: update to a newer flash player or a newer browser version.
niko
Quote
2008-04-10 05:47:00

I'm a big fan of your software but walking around in slow motion, firing fireballs in the opposite direction in close quarter battles and having to pay $20 to get to level 8 is not going to happen. I stick with Diablo.
Rene
Quote
2008-04-10 08:13:00

Works here mostly fine (WinXP, Firefox).
The tech itself is quite good. Especially the menus are fine. But there's one major problem and that is some serious judder (ruckeln).

Also there's still stuff I'm missing. First of all some sort of introduction. Why should I be running errants for some mage? But also for gameplay. On my first level-ups (I'm level 3 so far) I started to create a mage. But all the skills (except intelligence) seem to be for fighters.
The graphic objects are OK, the floortextures could be somewhat improved imho. The music is somewhat repetitive, but acceptable.
The fighting needs too many clicks. I don't know how fast/often I have to click for swordfights right now. I think it would be better if sword-attacks would simply continue until the player clicks something else.
For walking it would be nice if keyboard-input would also be supported. Also clicking on some map for walking larger distances would be fine. Though I guess that might be added anyway once a map gets added.

If I would work on it the first two things I'd try to change would be: 1: Fix the judder. 2: Change the introduction. After playing it for maybe 30 minutes all I got seemed to be some side quests. There should be some gripping main quest right from the start.
CuteAlien
Quote
2008-04-10 09:07:00

woha, thanks for all the feedback so far, especially the ones who submitted all the reports trough the forms on the website.

about the juddering: I cannot influcence this much, the game stresses the flash player to the maximum, your pc might be too slow. Also, updateing to a newer flash player version helped for some players.

Hey, Story writer here, I am willing to contribute. Though I already tell innocently I am writing my first major fantasy magical novel. Search for "Kinjal Kishor Wikipedia" on Google to see my current status. I am interested in giving back story or dialogs if needed. Dont ask any programming, but I can give all the literary stuff if need be.
kinjel
Quote
2008-04-10 17:28:00

I played Darkness Springs on
1 ghz, 256 mb ram, in cafe in Firefox 1.5.04, flash 9
It run all well,
seemed intersting no crash,
ran slowly though - considering requirements no problem
I liked it but, yup it lacks introdduction and every citizen is heroine's clone.
Still it felt amazing, a leap from what flash games were 2d mess to a 3d diabolo like game. And yes graphics are cool.
It is a great attempt from Niko, I know of only quake live which is on same principal, 3d game in browser and made in flash.
This game has amazing potential if done some more effort.
kinjel
Quote
2008-04-11 11:07:00

The game loads for me, and is somewhat playable, but all in-game text does not render.