Not long time has passed since Irrlicht received its own file formats (.irr for scenes and .irrmesh for static meshes), because it originally only included importers for external file formats. That's also the reason why there are not that much .irr and .irrmesh exporters yet, but there are some few. One is irrb, a Blender to Irrlicht exporter: 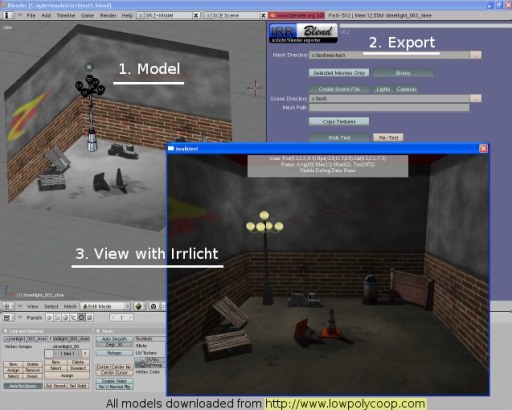 It is hosted on google code and open source of course. Currently, only static meshes are supported, but as you can see on their website, it already is very useful.

Thanks for mentioning this Niko. I know you're busy, but I'm _really_ looking forward to the official release of the latest irrEdit. I believe the Blender -> irrb -> irrEdit -> Irrlicht chain will be very attractive.
pc0de
Quote
2008-04-01 18:45:00

Joseph Smith: It's probably real, I saw someone write about this on the Irredit forum some time ago, asking Niko for permission to use the logo.
marXXus
Quote
2008-04-01 22:30:00