Today the Closed Beta of the Darkness Springs rpg (the game I've been working on recently) has been launched, and the first impressions are ok, IMO. So finally time to start blogging about the game. :) As you can read on the now updated website of the game, it is a 'single player online role playing game'. It is written using Flex, that thing I've shortly blogged about a few days ago. The game is actually quite huge for a flash game and it was fun creating it. And, although done using Flex and in 2D, it has a relation to Irrlicht. Take a look at the screenshots of the game. 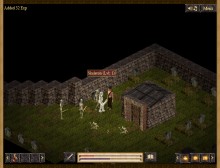 Don't they look familiar somehow? :)
Darkness Springs actually is the final realization of the game which was originally planned by me in the year 1999 and which should have been named 'Irrlicht'. It is even using some of the graphics created in 1999! In November, I blogged shortly about the old abandoned game, with a screenshot of its old website. So finally the 'Irrlicht game' is coming to reality, even if it comes with a nearly 10 year delay :)
The closed beta phase will run for a little time now, but depending on the amount of bugs and problems found, will turn soon into an open beta test. I hope it will be soon :)

"Darkness Springs uses Ambiera's isometric rendering engine for Adobe Flash to display its graphics. The engine supports displaying of (nearly) endless sized maps and instances of them at fast frame rates. It also provides the possibility to light these maps using infinite dynamic and static lights, to create the atmospheric locations Darkness Springs needs for its gameplay."

The 1 GB is just an estimation, I think it also would work with smaller amount of ram and a slower CPU.
About the iso rendering engine: Its not publically available :)
niko
Quote
2008-03-09 11:52:00

Reminds me of the games Spiderweb Software puts out. Only I think their games look more polished. But then the company has focused on isometric games for the past ten years or more.

Here's hoping your game doesn't end up being as bad as Runescape (I can't remember anymore why I couldn't stand it).

hm, I don't think the engine will be publically available for free or open source.
Ah, didn't know avernum. But their perspective is a bit different from Darkness Springs.
niko
Quote
2008-03-10 18:03:00