Greenpeace and the WWF had organized a campaign where all big cities in Germany and Austria should have switched off the light on last saturday, between 20:00 and 20:05. They named this Licht aus! Für unser Klima! (Lights off, for the climate).
So on saturday, we went to a tower block in the middle of vienna, and watched that event. Here is the result: 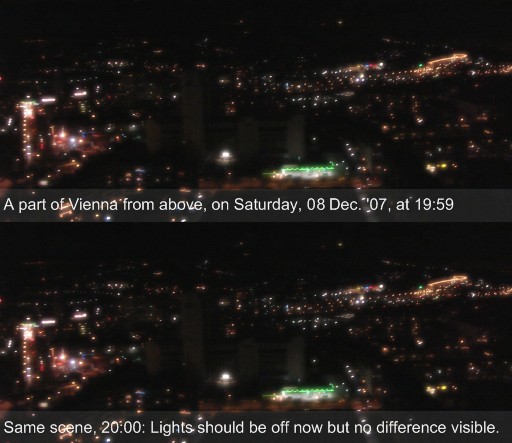 There was no difference to be noticed at all. Apparently nobody cared for the campaign in Austria. :(

This is just how brilliant Greenpeace and the like are. Imagine the conversation:

Greenpeace:
"Hey, let's raise awareness about our excessive power consumption by having some major cities turn off their lights for five minutes!"
Guy with brains who got lost on the way to the bathroom and ended up at the meeting:
"Won't that cause a massive power spike and thus cause obscene levels of power consumption, thereby completely invalidating your efforts?"
Greenpeace:
"What's a power spike?"

Maybe next time they should try choosing some time when there is still light outside. I wouldn't want to sit in a dark flat for five minutes... I also would prefer not being run over by a car because all of a sudden street lights go out. And I completely agree with the power spike thing.
xaos
Quote
2007-12-11 11:24:00

Well, we participated but realised pretty soon, the various candles we lit probably produced more CO2 than the lights in our house *g*
Nova
Quote
2007-12-11 11:44:00

The idea was not to reduce CO2 production for 5 minutes, but to raise awareness. And this happened, at least in Germany. Since many strong lights (e.g. those of the dome in Cologne) were turned off, there was a visible effect. And with all that support in the media I guess they made their point.
hybrid
Quote
2007-12-11 14:49:00

this campaign is senseless.
in 2005 only a quarter of the whole energy demands in germany were made by the private households. so reducing their enegery demand by half will not help. the industry has to change something.

i think this whole campaign is a big joke to get some more money. many companies promote their climate-saving products which are much more expensive and the stupid people buy them ... without any effect on the climate ... the only effect is in the moneybags of the industry.

dont get me wrong. i dont hate the industry. i am more frustrated about the people in germany ... most of them are like brainless zombies ... believing what the tv is saying ...

as green day said: "a nation controlled by the media"

maybe the next time they should disconnect some cable leading over a river again, so the resulting power spike causes darkness in greater parts of europe. this got some attention at least...
xaos
Quote
2007-12-12 11:39:00

Raising awareness by producing a power spike that creates more pollution at the end? Does that make sense? I guess no, since a recent climate change meeting in Indonesia actually produced more greenhouse gasses than the country of Chad does in a year (look for story in yahoo news). Why not kill a whale and spread its blood in the streets to protest indiscrimatory fishing? The best way is to teach by example...
juantar
Quote
2007-12-13 21:20:00

First I apologise for my views on this, but hey I can't resist a political subject.. so sue me :D

Every so often there's a paradigm shift that affects the whole world, for example the discovery of photosynthesis destroyed all forms of life that were unable to survive in the levels of massive oxygen pollution we now take for granted. In the long run it gave rise to multi-celled plants and animals, which can't be seen as a completely bad thing, but the loss of biodiversity was a disaster.
Like it or not the mass extinctions are already happening, climate change is an unturnable tide and like the oxygen that birthed us is only a symptom of the destructive cause: humans. We have changed the rules of the game, mother nature must now adapt to live with us, to kill us, or die.

Bringing attention to it is great, but imo organisations like Greenpeace have an unrealistic idea. Reducing suffering in the difficult times ahead should be the goal, avoiding the mass starvations and the wars, we should focus on learning to live with climate change not waste our time, money and most importantly our freedoms trying to turn back the tide. Time is running out!
gaz
Quote
2007-12-14 00:59:00

You all talk about Climate Change as if its something we have made. There isn't one scrap of evidence to suggest that CO2 has got anything to do with Climate change. The only thing that causes the heating/cooling of the earth is the thing that is 99.9% of our solar system - the Sun. Governments and big buisiness are using the 'Carbon footprint' and associated crap and the environmentalist movement of the 70s-90s in order to galvanise us all around the same thing - how much we love our planet so they introduce a global carbon tax. Basically - tax us for the air we breathe. I know this is out of most peoples comfort zone to imaging this because we are told daily, time after time about climate awarnes or being green and energy use and therefore what I'm writing may seem ridiculous but I urge you all to do your own research and stop believing everything you are told by your respective authorities. A good place to start is the film 'The Great Global Warming Swindle'. If anybody thinks this is crazy please start a flame war or email me, I would be happy to share lots of verifiable facts that prove that CO2 and the whole thing is a pile of BS.

@gaz: Hey, if you can predict what will really happen for the next hundred or thousand years than adapting those changes would be an option. But since probably no one can, since you never know in which state a chaotic system will stabilize, it's a far better option to try and keep the current state. We know that it is stable in a quite human-friendly way (considering temperature, oxygen level, etc).
@Winston: Even if the climate change sceptics woulad have better evidence you will still face the problem of finite ressources of the known energy sources. And since at least one of those two facts is true you will face a problem in 100 years (latest) if you don't start saving energy and change to new energy alternatives.
Oh, and doing energy saving now and pretending that it will slow down the effects and hence reduce (or postpone) parts of the costs we have to face right now (due to flooding, landslips, etc) is also a chance we have. Moreover, new techniques can even enhance convenience to your live. Instead of changing most light bulbs every year, you only have to change them every 10 years or less. Adn this is just a small example, there are lots of other advantages.
hybrid
Quote
2007-12-14 14:38:00

@Winston, with a name like that I guess you should know that Ignorance is Strength ;)
The Great Global Warming Swindle was broadcast here in the UK by the same channel (5) that claimed the moon landings were fake and 9/11 was an inside job (NEVAR 4GET!1). You shouldn't so readily put your faith in sensationalist claims, remember there are many more people with books and adverts to sell than those with a commitment to the truth, so you should carefully choose which ones to believe. What do the respectable scientific journals have to say on this subject, or doesn't this count as edumacations?
Also open your eyes, look at Google Earth, scroll around the world and look at the patchwork patterns of fields which were once forrests - this change happened in the last 20,000 years, all thanks to humans. Anyway if you're trolling then nice work, I took the bait. ;-)

@Hybrid, good points, but I really think it's too late to make a difference even if we start killing people and planting trees on a massive scale.
My main problem with energy saving is that less is becoming the new more. At the moment the poorest families in Western Europe are still quite energy rich, they can afford luxuries like heating and lighting, transport, even home computing, but also things like out of season fruit and the produce of energy expensive manufacturing processes.
This is a wonderful state of affairs! Preventing a rich/poor energy divide is something far more important than saving biodiversity, at least to me.
Then again, I'm just another ignorant guy who likes think there's simple solutions to all complex problems, which is probably what causes all these arguments in the first place!
gaz
Quote
2007-12-14 21:16:00

Have you tried digitally comparing the two images? (for instance, a difference filter or subtraction operation)
nayhem
Quote
2007-12-22 10:59:00