Before I started a 3D engine project and named it 'Irrlicht', I was working on a small hobby project game, but didn't finish it, unfortunately. The name of that game was planned to be 'Irrlicht', but later, because I had canceled the game and needed a name for my new 3D engine project, I simply borrowed the name 'Irrlicht' from there. :)
The 'Irrlicht'-game was planned to be an isometric role playing game, and I was working on it in the last millennium, in the end of the year 1999. I even had a website for it and was updating it regularily, writing development news, something which people would today call 'a blog'. Just found the website on a very old backup CD: 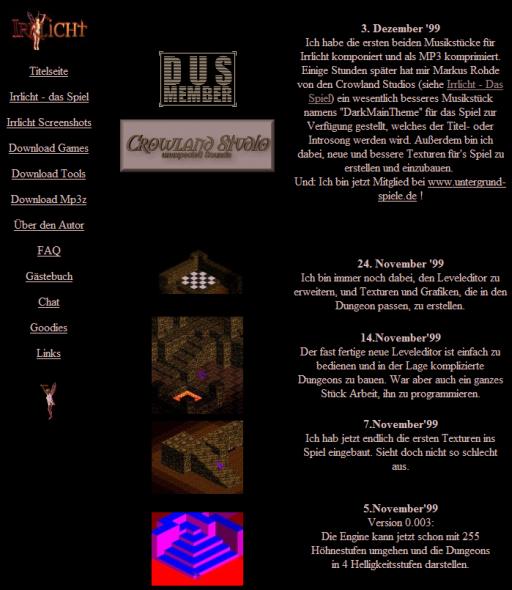 The website was written in german and some parts of the site today appear quite funny and naive to me. But this was the first time I used the name 'Irrlicht' for one of my projects. The mp3 music file I am talking about on that shot above still exists: It is the music which can be heard in the Demo example of the Irrlicht 3D engine.

Ye good olde tymes! Would you have imagined where you would be eight years later? Good progress and something you can be proud of.
matt
Quote
2007-11-16 18:41:00

hehe have to add sth "255 höhenstufen"