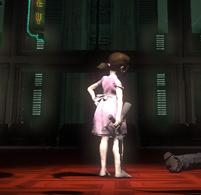 I know, I said I wouldn't do it, but after everybody told me I really should try it, I went to a shop and bought bioshock. I now played through it, and summarized: It's a nice game with a gamplay similar to SystemShock and DeusEx, beautiful graphics and an interesting setting. And after I've finished it now, I felt like a dirtbag after being presented the evil ending just because I harvested one single little sister and because I did not save all of them. ;)

I heard there are three endings, one really bad (all little sisters harvested), one really good (all sisters rescued), and the one you have.
IMHO, System Shock 2 > BioShock in nearly any way.
you how knew
Quote
2007-11-02 12:54:00

As I said in my review, I think the ending was the worst part, which was a shame, but actually that was the same in System Shock 2 as well; the showdown with Shodan was a massive anticlimax. They can make some great games, but they haven't quite got the hang of endings yet. Still one of the hilights of the year though, along with the Orange Box.
Steve
Quote
2007-11-02 13:45:00

I am playing Bioshock in 16 bits graphics on 6200 and still find it great game with substantial atmosphere. A bad ending does not get 75% good down. Game is still utterly enjoyable. I didnot liked it when I first heard the idea but after playing yup it is gret game of this year along with orange box.
Kinjel
Quote
2007-11-02 17:07:00

Shame, watching it on YouTube doesn't really do it justice because you miss all the build-up and little tidbits like 'the cake is a lie' scrawl and such. The end is a perfect culmination of all that.
Steve
Quote
2007-11-02 20:06:00

DeusEx Is my absoute favorite game of all time (The sequal sucked). I love the fact that you could complete the game in almost any order you wanted to and do what ever you wanted.
TSM
Quote
2007-11-05 02:27:00