This seems to be the season of game demo releases: This weekend, I tried out the Crysis Demo. Crysis is the latest game created by Crytek, the german company which became popular with their first game 'FarCry', which is also based on the CryEngine (Crysis is based on the CryEngine 2).
After starting the demo on my DX10 capable Vista PC, the game set all graphics options to 'low', reducing the beauty of the announced nice-looking world in Crysis to a minimum. So I changed all settings to 'high', and to my surprise the game still was running smoothly with a high fps count. Needless to mention that the graphics looked astonishing impressive: Niceley animated blurred shadowmaps everywhere, cool lighting effects, impressive water waves with reflections/refractions, post processing effects full of atmosphere and so on. Great. 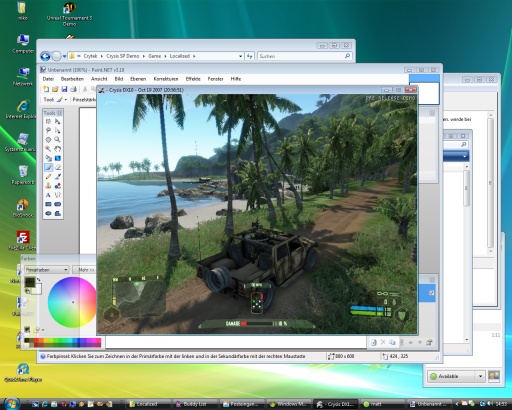 It was very nice to be able to play around with the graphics settings of that game: In Crysis you can open the options menu and change almost every setting while the game is running, without a significant reload or waiting time. Some other things about the demo I liked were: All in all, a very great demo and I didn't regret to have downloaded the more than 1 GB sized package. I had expected Crysis to be a boring 'Farcry with better graphics', but Crytek really made something out of this.

You seem to be pretty interested in the soft shadow maps, I made something like that with Irrlicht a while ago, here: http://irrlicht.sourceforge.net/phpBB2/viewtopic.php?t=23638

I wish I can run Crysis but I don't think I can afford a good enough video card.

Hmmm, Bioshock, Unreai 3 demo shortcuts also.
I am playing Bioshock in 16 bit graphics on nvidia 6200. (tears)
Still the game has great atmosphere and solid gameplay. To say I was pro bioshock before its release as a boring FPS but it has real content. Never played anything like that before except maybe Half Life 2. Crysis is really going better than the expectations. Really great Graphics with better gameplay. But how is facial expressions in it. I like talking emotional NPC's in game Like HL2.
kinjel
Quote
2007-10-30 16:00:00

Unfortunately, i dunno if its the driver for my card or my config is not good enough but this game did not seem to run anything close too smoothe when the settings were on anything more than evrything low., the resolution was 1280 by 800 but i hads to reduce it even more to eb able to play it at a bettr frame rate
Hemz
Quote
2007-11-11 10:19:00