I'm running Windows Vista for about one week now. Some people already noticed this when I blogged about the Unreal Tournament 2003 demo. ;) I've not really used Vista and the new machine for 'real' work - aka programming C++ - yet, but used it for websites updates, mail writing, gaming, customer management, testing and similar already, and so I think it is time for a short review: 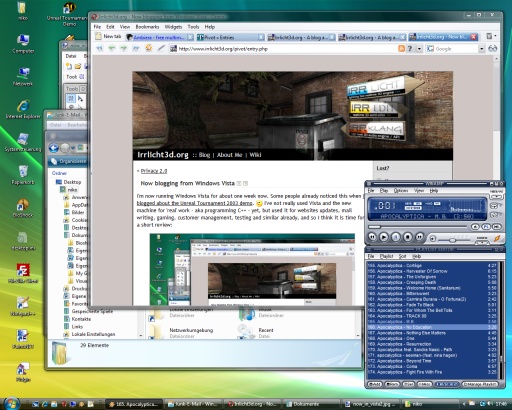 I've read and heart a lot of rants and negative reviews about Windows Vista before I actually used it myself, so I was expecting the worst, but actually I am pleasantly surprised: Windows Vista is not that bad:

So, I'm going to blog about Vista some weeks later again, when I gathered more experience with it.

Well, aero is useless to me and i had disabled it until i found this program: http://insentient.net/

Now aero is useful as i get a nice feature fron OSX in Vista.

A tip using Aero: disable Window animations in performance settings because over time u will get tired of them.
ASpanishGuy
Quote
2007-10-19 19:21:00

Uggh. Glad you liked it.

From a MinGW user perspective, it's an absolute nightmare to use.

with proper video drivers OpenGL works just fine. the bundled drivers have no OpenGL support because neither nVidia or ATI had their OpenGL functions of the drivers ready at the time
The Anaconda
Quote
2007-10-20 05:32:00

I had Vista installed on my Sony Vaio, as it came shipped with it, for some months and I now have moved back to Win XP and am very happy about this. Start-up times may not be that problematic when you don't have much installed, but it took the thing about 2 mins to start up later on, and shut-down took even longer. Vista has serious problems with certain applications, e.g. the acrobat reader always tried to re-install some components at start-up (and when activating the context menu), as well as the new office package, which becomes VERY annoying over time. Vista also made some problems with flash, even though it was the vista version, having a delay of about 1 second when starting certain animations, for whatever reasons... next to being rough on the hardware its new file search engine does regular indexing, which makes things more unpleasent as well, but maybe this can be turned off.

When I re-installed XP, everything went a manifold faster and of course more reliable. My laptop is a core2duo 2ghz, 2gb ram and a mobile geforce. Vista turned it into something almost useless.
So much about that, but it may not be a problem with a high end desktop system.

As you've seen from my blog, I haven't had any major compatibility issues with Vista (except for turning UAC off because of its insistence that anything called 'patch.exe' must need admin rights - moronic). I just find it a very small step beyond XP that hardly deserves to be called an upgrade, never mind a 5-year upgrade.

Personally I don't find Vista starts up any faster than XP and at runtime it feels very similar. Dx10 is okay, but then my card is an 8600 GT Go which whilst not slow, is capable of true Dx10 only at fairly low frame rates, so it's not overwhelming. Dx9 features on the 8600 are very quick, in contrast. I have an 8800 on my desktop but that's still running XP, and I haven't felt the need to change that (I have too many bits of work ongoing to risk it right now).

As others, I think Vista isn't the revolution promised by Microsoft... Come with Vista: drivers problems, apps problems, problems from all parts...

What i mind most about Vista is the built-in DRM-crap. Have you heard about the problem that the networkspeed goes down when you play sounds? :)
Matthias
Quote
2007-10-22 09:51:00

> When will irrlicht be able render using DX10?

> Have you heard about the problem that the networkspeed goes down when you play sounds? :)

I too am curious what it is that makes you think DX10 looks nice. The only, and I mean ONLY, reason I keep Vista on my desktop is because I have added, and am still working on DX10 support in IrrSpintz. If I wasn't interested in learning/maintaining DX10( just to keep up with technology, no other reason ) I would play frisbee with my dog and the Vista CD( and have XP on my machine ).
Spintz
Quote
2007-10-29 04:52:00

Concerning the CHM problem: the same thing can acutally happen on XP already. Had that case in our company network once.
Telepath
Quote
2007-11-02 21:59:00