The Unreal Tournament 3 Beta Demo has been released this weekend, so I had to try it out: Apart from a short glimpse at Gears of War and Bioshock while somebody else was playing it, I had never seen the Unreal Engine 3 in action yet.
Midway or Epic had decided to make the demo available only for Fileplanet subscribers on the first days, so it only was available on some few servers and very difficult to get, but I was lucky. After I had finished the ~700MB download and had installed the game, I was greeted with the nice modernized Unreal music theme, which maked me feel like home :) Then I played the game of course, and here is a short review:

Gameplay: It's just like UT 2004, there is no real difference. In short: It feels like the took they UT 2004 code, replaced the graphics and extended the levels and made some minor additions and changes here and there like adding some game modes and some vehicles. It's a sequel game, after all, right. I don't know if this decision was good or bad, but for me personally, it decreases the value of the game because I already played UT2004 to death and so UT3 ist not that exciting any more because there is not much new in it. But apart from that, I think the gameplay is fun. The darkwalker, a War-of-the-Worlds like tripod, which appears in the deathmatch game of the demo is absolutely cool, of course. 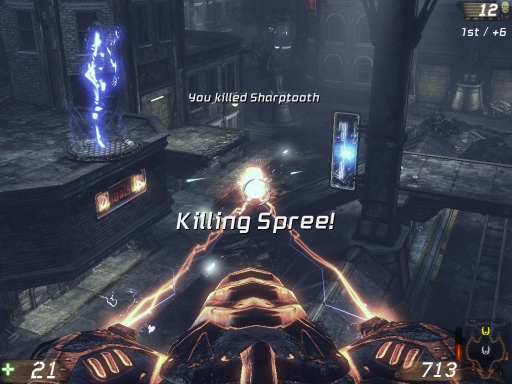 Graphics: The main reason I tried out the demo was because I wanted to see the Unreal Engine in action, expecting that Epic would use the game as showcase and sales assistant for their Unreal Technology. I hoped to see some of the advertised key features of the Unreal Engine 3, but I was a bit disappointed: Appart from a higher polygon count, more detailed textures and some post processing effects, the game seems to look like UT 2004. Then I noticed that the details seem to be turned to low by default and I set them all to the highest possible value, and the situation improved a bit. Characters now had shadows, and there where normal maps everywhere, but I was still missing the promised cool light effects and shaders such as parallax mapping. Also, the characters still did not have much detail. But the game looked really nice, and maybe I had expected too much. 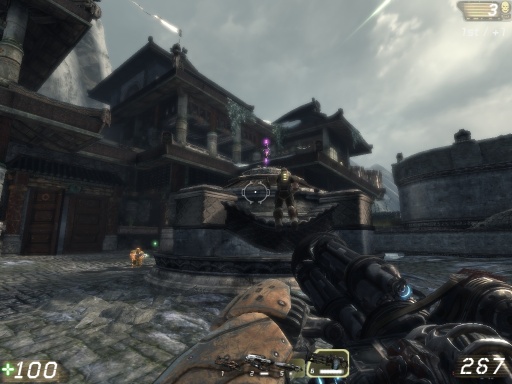 So the demo didn't really come up to my expectations, but it only was a Beta Demo, who knows what the real game will be like.

Update: Yep, I'm running the game on Vista, with a DX10 graphics card. I've now seen screenshots from the demo on other websites, and they look better then the game on my system, strange.

I used Far Cry Editor and find it best of all. It is extremely good and free from Bsp errors as it does not uses bsp. It mainly uses vis and portals. It was very easy to create a fantasy themed map in it in 5 hours only at first trial. so good.
It took many days to get aquainted with Unreal Ed or QE Radiant.

And I really think that rela time radiosity of Half Life 2 is great. Can anyone tell how well was UT 3 indoor lighting as compared to source engine. And how was terrain support.


Anyway it looks like they will keep upgrading unreal engine 3 till 2010 and UE4. Though it is not necessrily bad to have similar gameplay as of UT2004. Why fix something that is not broken.
And innovations are generally a forte of id software.
Hope to see a nice Quake 5 Arena in soon with Id Tech 5 engine. looks like it is also not far away.
Meanwhile I liked the simple and fun gameplay of Quake 4 which I am playing these days.

Aslo looking for Crysis to play. Hopefully they make a action game which is not too much tactical like Far Cry in whic weapons emptied almost instantly. U can understand as I played far Cry just after serious sam 2.Ah The diference.
kinjel
Quote
2007-10-15 17:28:00

for me ut2k3/2k4 was nice enough ;)
gameplay is more important than graphics in my opinion!

look at counter-strike and starcraft/warcraft/wow ...
all these games have no good graphic at all ...
but the people still play'em ...
and why? yes ... because gameplay is nice ;)

so why spending that much money on cool new effects no one really needs and not spending enough money on new gameplay?

nethertheless the engine it self is impressive.
they should have indie-licences for people like us xD

I played it too. Didn't even know it was a beta? Or did I play the non-beta? (i didnt get it from fileplanet.)

Anyway, i heard one couldn't access the highest graphics-settings in the demo.

For people who took advantage of ut2k4 advanced moves, ut3 is a quit a bit different from ut2004, but not so much from ut99. Here is why:

1. no dodge jump
2. slow weapon switch meanings this game relies less on gun combos
3. guns do more damage
4. The guys seems smaller, thus harder to hit
5. Minus the ripper, all the guns function closer to ut99 with ut2k4 ammo


Graphics after level 3 doesn’t do anything, according to the gamespot graphics guide… so i’m assuming level 3 is the max settings for the demo?

fyi, I’m not pro but I made appearances to the top 10 player rankings

I have only played the original Unreal Tournament (UT99) and it was really cool.
Anyways why don't people make great games like Deus EX ( http://en.wikipedia.org/wiki/Deus_Ex ) best fps-rpg game i have ever played and it was based on the unreal engine. I think games are judged too much on graphics that almost 80% of the work put in the game goes here. Its just like movies.. all that people think about are special effects.. nobody ever cares about the story or gameplay.
leo
Quote
2007-10-17 08:49:00

I did run it on a geforce 6200 (that's the minimum spec needed) and it simply looked horrible on that. The textures where so blurry on my system that it was close to unplayable. I can only hope that it's just some bug which they can fix until the final release.

@ stef_: if you ever played Deus Ex you will see what i mean by a great game.

maybe someone else mentioned this, not gonna reread it all now. but I had similar complaints of its look after playing the demo earlier today on a top of the line machine, and I was just now informed by some people that the demo only has "medium" textures, no high or ultra high textures. so it may look better later
The Anaconda
Quote
2007-10-19 04:29:00

I liked UT3. It's very addicting play vehicle ctf. What I hated about UT2k4 was the small player models which made everyone feel like ants running around. Even with the larger maps, UT3 feels more like UT99 and much more in your face. It does look a lot like UT2k4/3, but it feels much better. As far as some of the gameplay micromanagement, I think they need to balance some of the weapons. Is it me or does the biorifle suck unless you hit them head on with the blob? One could walk over your bio blobs without taking damage until they went off. They should make it so if you get close it goes off, like in UT99. And it seems like the blobs stay there forever. I love the hoverboard though. That fixes everything I hated about ONS for UT2k4 (super large maps... you can't find a vehicle you're stuck running across the map for 2 hours). Sniping becomes harder with the skins lighting up after firing. Otherwise, I don't see anything wrong with the game. It met my expectations and more. Definitely getting it when it releases :P
vadim
Quote
2007-10-20 21:21:00