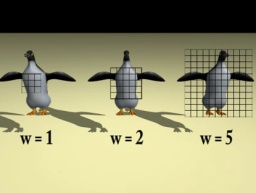 FastLSM is a method for soft body simulation - makes it possible to calculate tons of colliding soft bodies in real time, sounds like a perfect algorithm for computer games. They have a nice video on their webiste which shows what it does.
A lot of people have mailed me a link to this - thanks - because they are obviously using Irrlicht in their demo. But after I downloaded the demo, it wonder how they are using it: The demo is incredible slow on my pc and the archive contains dlls like glut, glew, zlib, devil, sdl and similar, libraries which are all completely unnecessary if you are using Irrlicht. But I'm now really too lazy to analyze the binary, there is no source included. Anyway, nice they are using Irrlicht for their demo.

Some comment on ogre3d forums said that they use the .obj loader from Irrlicht. Interesting technique of reuse... So the rendering happens with plain OpenGL code. But it should run reasonably fast - even my office gfx card makes a decent amount of FPS.
hybrid
Quote
2007-09-27 17:55:00

The last demo "Real Matter" used Ogre3d. Was fun hacking the zombie into pieces! (I first thought maaan FastLSM ripped Real Matter off, until I saw it was made by the same guys)!
Gauntlet
Quote
2007-09-27 20:59:00

This does indeed look impressive from the video. unfortunately (as was recently discussed on the Bullet Physics forums, it has been patented by the researchers.

In other words, actually reading the paper he presents (or worse - looking at the source code he has put up on his website) will pull you into the nasty realm of "software patents" and negative knowhow.

Bad news that, because I could REALLY see how it could be integrated into a nice post-appocalyptic zombie game (Resident Evil with "mushy" zombies!)