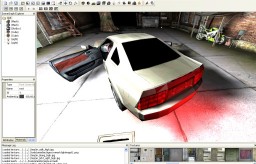 I just released irrEdit, the free irrlicht editor in version 1.4alpha, as preview. It includes some few bug fixes, support for .irrmesh files, an improved lightmapper, an internally used irrKlang 1.0 audio engine and of course the latest Irrlicht version from the svn.

Some people might be irritated by the new version number, because the last one was version 0.7.1. irrEdit will from now on simply use the version number of the corresponding Irrlicht version, because it is really closely coupled with Irrlicht releases. Should there be irrEdit sub versions, they will simply have some added letters to the version. And yes, there is no 1.4alpha Irrlicht release yet, but we are planning to do this soon: Hybrid, Luke and Bitplane are working to change and fix some few features, but this new irrEdit version should be compatible already.

And maybe interesting for all people with irrEdit 0.7.1 source code licenses: You are able to upgrade to version 1.4 for free if wanted, just let me know. So have fun editing your 3D worlds using the new irrEdit.