Amelia (ATLAS Multimedia Educational Lab for Interactive Analysis) is a project for High-Energy physics featuring the ATLAS detector at CERN, the world's largest particle physics lab. The application looks like this: 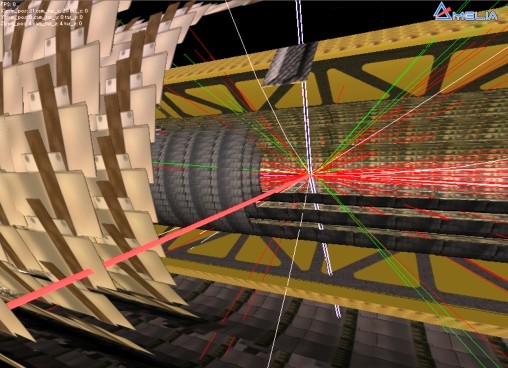 Using the Irrlicht engine and irrKlang, AMELIA integrates event analysis and contextual media in a 3D interface. The project is open source and IMO one of the more impressive (maybe also because I have don't know anything about those physics ;)) non-game projects made with these libraries.

What a pity that there are no public info and screenshots available except for this one. I'm really interested in what the app will lok like in action. Now going to tell this my physicist colleagues :-)
hybrid
Quote
2007-08-24 16:04:00

Hi, I'm the project coordinator and lead developer of AMELIA. The reason why we're not providing more information and binaries or screenshots is because there are a few corners to polish until we launch the first beta (which should be in less than a month). Also, some new features are just now being implemented (like the physics background information or the "guided tours" of the ATLAS experiment) and those were not committed to the SVN yet. I promise you'll not be disappointed in late Septembert hough ;-)
Quantum_Leap
Quote
2007-08-24 18:35:00

Wow. I can't believe that irrlicht is powering the graphics in the visualization of the ATLAS. That is AWESOME! For those of you who have not Checked out CERN's site, you should hit Niko's link up in the article, it's awesome.
Andrew
Quote
2007-08-25 01:27:00

A lil' bit off topic: I like the new blog banner. Is that the mesh that is used to test irrlicht's new format? You keep saying that you are not an artist, but I think you're really one. The rubbish bin showed that :D. Normal coder just concentrate on the level itself, not small details.
bull
Quote
2007-08-25 12:47:00