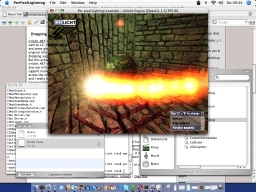 As previously mentioned on this blog, I am now the proud owner of a mac mini. The reason for this is that I wanted to improve mac support for Irrlicht and port irrKlang to this platform (soon to come) but also because I had not much experience with macs until now and was a bit curious. So here is a short summary of the first impressions from a developer perspective.

The MacOSX graphical user interface is a bit different, and it took a bit more time (some hours) for me to get used to it, in contrast to the switch for example from windows to KDE or Gnome. Shortcuts are different (Apple-Key instead of Control), the minimize/maximize/close buttons do different things, the dock is new but feels useful.
Cool: the mac mini comes with a remote control, so you can use it as DVD player, sound system and multimedia station. Nice idea.

Programs: The operating systems includes a useful set of tools like DVD player, text editor, mail client, music player and similar. Of course there is always something missing, and I quickly installed Opera which - for me - loads and displays web pages about 4 times faster than Safari, the self proclaimed "fastest web browser on any platform". When I searched for a nice IM client for macos (I decided to use Adium), I found that the amount of free applications for macos seems to be a bit more limited. But who cares, I have everything I need now. I can recommend Seashore as image editor, it's based on Gimp.

Development tools: MacOS offers a free (after forced registration) C++ IDE named XCode, and it really is nice. Actually, I think it includes the first usable gdb based debugger frontend I've ever seen, most others I used in the last years were crappy, slow or didn't work. Also the project management in XCode is very nice, for example you can just drop in cxx/cpp and .h files or packages and press build, no need to add include search paths or similar in most cases. Need to play around with it a bit more, but until now I like it.

BTW: I totally like the fact that MacOSX is based on Unix, i needed for example only about one hour to get my sound library irrKlang to compile on it. It doesn't play sounds yet, but I should only need to write an CoreAudio based output driver for it. Once this is done I'll publish an alpha version, but it could take still some weeks because I am a bit busy with other projects currently.

It's OT but another interesting think I have seen recently
it's having a GUI system html/javascript/flash based using llmozlib
http://www.ogre3d.org/phpBB2/viewtopic.php?t=32384
It would be nice to have it running on both irrlicht and ogre.
I'm looking for having llmozlib running on linux (win only by now).
stef_
Quote
2007-07-11 15:08:00

It's a really funny coincidence because I'm off to buy a Mac today :) I've only tried XCode briefly on a borrowed machine and found it pretty weird personally but hopefuly I'll get used to it.
Steve
Quote
2007-07-11 15:43:00

Quick tip, Quicksilver is a must have app for any Mac user. But I'm glad to see there will be better Mac support. I hope you plan to port the editor to Mac and it would be super awesome if you make the Mac equally supported with Windows and Linux. Yeah!
joemacher
Quote
2007-07-11 15:53:00

hehe, maybe this iPhone marketing subconciously persuades us all to buy apple products :) Interesting, will have a look at quicksilver.
niko
Quote
2007-07-11 16:24:00

Niko, it seems that at this moment it's still a problem to build an Irrlicht application in windowed mode (like using wxWidgets) under Mac. It's a handle problem, I believe. Maybe now that you have a Mac this can be worked out?

Now that you're on the best OS ever (just kiddin ;p don't wanna start a mac linux windows war here ^^), I advise you to try textMate.

As a developper textMate will surely help you, it's a really cool text editor with a lot of features, I even use it as Xcode's text editor. http://www.macromates.com.

This program isn't free, but you can at least watch some screencasts or download the demo, perhaps you'll fall in the trap like me and buy a licence after :p
Nico
Quote
2007-07-12 08:54:00

Stef, you better see this: http://irrlicht.sourceforge.net/phpBB2/viewtopic.php?t=20960

I'm actually integrating llmozlib within Irrlicht for a project following the instructions given on this thread
Quantum_Leap
Quote
2007-07-13 21:15:00