Just found a nice map of the distribution of social networking websites over the world, such as orkut, myspace, or studivz. 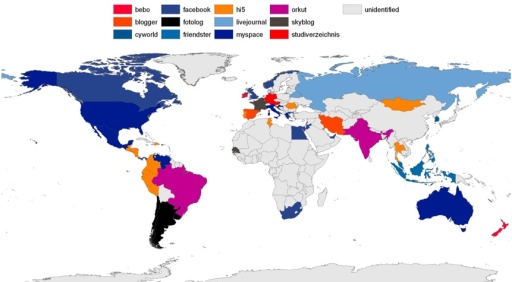 Too bad it doesn't include their business brother pages such as xing or linkedin. But it is interesting anyway. For example I didn't know that orkut is only dominant in brazil and india now, once I had an account there too. And interesting that studivz is listed in Austria and Germany as primary social network page, although it is only intended to be used by (ex)students. (Yep, I have an account there too, add me if you like.)

This map seems correct even though I would have thought it could not be that simple.

In a way it's sad that social networks are quite so partitioned like this. There's also XBox Live, PS3 Home etc which require more duplicate accounts. I got fed up with trying to keep up with them all and just stick to my LinkedIn account now. Once we have social networks that interoperate and are as universal as email, I think they'll be far more useful.
Steve
Quote
2007-07-05 18:00:00

I hope you know all the security problems with StudiVZ? Guess your account is already hacked... Probably the others also have such problems, but StudiVZ made their best to become discredited.
hybrid
Quote
2007-07-05 18:12:00

Little edit there, orkut is dominant in brazil, india and pakistan too. I am a pakistani too and most ppl here use either msn or they use orkut.
Umar Nizamani
Quote
2007-07-05 20:59:00

im using schülerVZ i think its nearly the same as StudiVZ

Steve, even more sad is the big gray area in Africa and many Muslim states. Though I don't know the metrics they used to determine the country colour, as I don't believe no one is using anything in Sweden and Finland for instance. My social network I'm ensnared in is probably IRC/ICQ, how very Web 1.0 ;)
haffax
Quote
2007-07-05 23:09:00

"although it is only intended to be used by (ex)students"
Isn't "student" english for "Student" AND "Schüler"? Shouldn't non-germans be confused now? ;)

All this centralistic social nonsense is killing the whole point of the internet. You all have no taste and should be ashame. ;) (this is about myspace. people complained about censorship there... i dont know anything about other "social" websites.)
Matthias
Quote
2007-07-06 11:16:00

I guess GREY color shows only that places hasn't focused come 1 network. Indeed am using ICQ, MSN, Yahoo and IRC (all the time) BUT, I can say that ICQ is most popular in my country (ICQ is leader of messangers in my country). But in Africa and other grey continents there is no leader-messenger.... so all are in use same.
greenya
Quote
2007-07-06 16:14:00