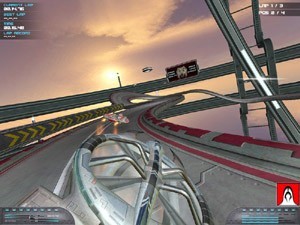 Some weeks ago, Michael, the programmer behind the commercial Irrlicht based racer game H-Craft Championship donated to each member of the Irrlicht Engine team a free copy of their game. That was very nice, thank you!
I played the game several times now, and now I know even better why I don't play racing games: I absolutely suck at them ;) I always had this problem. There seems not to be such a thing as a 'good video gamer'. Skills also vary from genre to genre. For example I am a quite good fps player. At least I persuaded myself that I am. ;)
But it is nice to play H-Craft Championship now and then when I have time and I think I have become a little bit better. And - of course - it is nice to watch graphics rendered by code partially written by myself while playing ;)

I still did not see any other level than the three already in the Demo :-( I simply don't get enough points to advance... Michael said it's better to use an analog controller, but I'm stuck with my keyboard. I hope it's just lack of practice. Otherwise I won't see any other graphics.
hybrid
Quote
2007-06-25 17:13:00

The demo is quite fun to play.
But I really think the game is a bit too hard with a normal keyboard to play. I keep falling down all the time - maybe a bit more fraction and a bit less free floating...
Gauntlet
Quote
2007-06-25 23:55:00

No mouse control, we had it for a while, but it was just not possible to steer with it in a useful way. But it can be done with keyboard - I played through the whole championship with it getting 100% of the points to be sure :) But I did not use defaultsettings, but a 2-hand control.
Not sure if it helps, but Philipp (he did the graphics) made a little video called "H-Craft Driving School": http://www.irrgheist.com//phpBB2/viewtopic.php?t=30