I just released irrEdit 0.7.1. There are some useful changes and additions in it, one is a frequently user requested feature, a 3D grid: 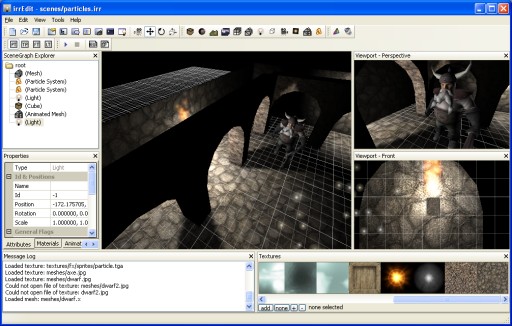 It is a bit transparent by default, but this as well as its size and color is configurable. Other new features include the 3D sound scene node (using irrKlang of course), as I already showed using this video, or Ogre 1.4 .mesh loading support. Happy downloading.

niko,
a question:
irrEdit is great, and I always see very nice scene (nicely modeled, and textured(!)). What model editor do you use for creating models and that open it in irrEdit. I know that Irrlicht support alot of models, but I don't know which models most supported (at least ability to import: mesh, texture coordinates and animation).

Please, give me advice: what editor? and what format of model files?

I reckon give Linux support a complete skip. Why would anyone want to use irrEdit on Linux??? I use Linux personally for many projects, but 3d anything is last on my list of things I want to do on Linux.
wtf
Quote
2007-06-17 22:14:00