Nothing I could blog about has happened during the last few days. I think this will change next week. But until then and because it is some kind of tradition (examples Krimhild growing, Krimhild mad, Krimhild II) on this blog and I didn't blog about her for some time now, here is an update on Krimhild: 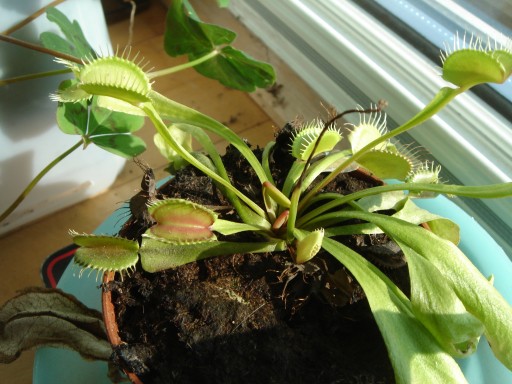 Krimhild, my room mate (it's a carnivorous plant, if you are new here) absolutely loves my new apartment. She nearly died in the old one but now she gets a lot of new traps, as you can see in the center. One of the traps even is red, meaning she likes it here, although she currently gets attacked by two monster sized shamrocks as you can see. And yesterday, while I was programming, she caught a small fly. Go krimhild, go! :)

Continue like this and you might be responsible for a sudden rise in demand for carnivorous plants in the computer geek culture :D
TheGolem
Quote
2007-06-01 13:01:00

[Pointless rant]carnivorous plants... um well I hate to disagree with you, but there is no such thing as a carnivorous plant... That is still an autotroph... which means it produces it's own food. It still photosynthesis... The traps catch flies to consume for nutrients not for the creation of atp.
[/Pointless rant]

SkaCahToa, I would be impressed if that rant actually made sense. To be carnivorous one doesn't have to eat meat solely for the creation of ATP. Although that would be a more specific definition it isn't the scientific one. Charles darwin himself even wrote fly traps as carnivorous.
blah
Quote
2007-06-02 21:57:00