I just released irrEdit 0.7, the free 3d world editor. And as you might notice when looking at the web site, there are a lot of changes, not only irrEdit specific ones. I'll summarize this here a bit.
First, irrEdit 0.7 is completely new now, nearly everything has changed and I had to rewrite a lot of code. I hope that everything still works, but some things might be different now. There is now a plugin system for editing your own scene nodes or adding new file formats to irrEdit. There are example plugins with code to learn from it. It is also possible to let games run inside irrEdit, but this isn't totally finished yet, it doesn't work on some 3d hardware. The source of the engine used is included in the package, and there is a irrEdit library with a scripting and a physics engine included (undocumentated yet). Terrain editing is possible now as well. And, there is a new tutorial written by Daryl Lee. Here is a shot trying to show some of the features: 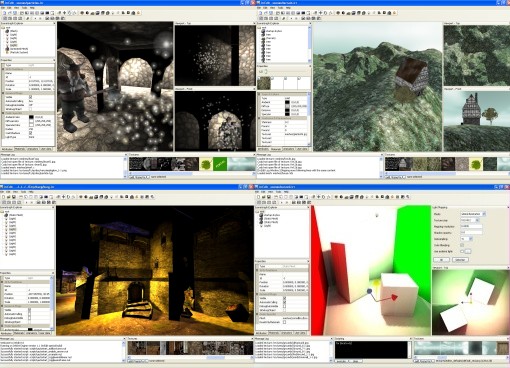 Because so many people asked for it: I'm also going to make the source of irrEdit available for people really needing it, for a small license fee. Also, you will be able to redistribute and customize the editor for your games with that license. This will be possible in about two weeks.

And finally, did you notice the new ambiera.com website and the new logos? Thanks for all the people sending me new logo ideas for irrKlang, irrEdit and irrXML, I liked them as well. But I've now decided to let new logos to be designed by Lemonaut Creations, and as far as I can tell, they did a good job.

Very nice.. I have been waiting for world editor library so that I dont have to develop from scratch.. And you have good lighting library which is a major plus
syedhs
Quote
2007-04-28 05:00:00

I also have a new logo for irrlicht, but I think the irrlicht logo will stay as it is. We all already have familiarized with it very well :)
Yes, the game plugin bug is the problem I've been writing about. It will be fixed soon.
niko
Quote
2007-04-29 07:32:00

It seems that this release was rushed, here's some bugs: gameexampleplugin works(?) only with Software renderer; sometimes it is impossible to exit irrEdit (it asks to confirm losing of unsaved scene, but after pressing OK it just goes back to editor), after opening options window exit works normally.
butz
Quote
2007-04-29 09:27:00

okay, Here's something strange...
I had my game terrain done with octree scene nodes in irrEdit, then the new version came out, and i read that they were not compatible irrEdit 0.6 and 0.7, so I started my world map again, tried to use multiple heightmaps in my technique but it's really buggy, then I tried to go back to Octree scene nodes but it would crash trying to load them. To create my heightmap meshes i am using Milkshape 3d (latest version), they are 89x89 in size... not very big, then scaled up in milkshape 3d (i tried to scale them in irredit, and that works too. Now that i can't use irredit 0.7 to work on my game I decided to go back to 0.6 to do it all over again, and now it won't even boot... I re-installed irredit from the setup files but it is still not working... any fixes coming out, anytime soon? I don't use other world editors, and I could really use the visual reference irredit provides me with.

Same problem as tsghost here: OctTreeSceneNodes do not seem to work with .b3d files generated by gile[s], while regular meshscenenodes work...
I tried switching back to IrrEdit 0.6, but it doesn't start anymore...
Any help?
Loris
Quote
2007-05-02 17:17:00

I managed to convert my terrain meshes from ms3d to 3ds format, and re-inserted them into my game, it seems that irredit 0.7 cannot handle ms3d models with high poly counts (15000 or so poly will cause the editor to crash) Still can't get irredit 0.6 working, but I don't really need it anymore. 3ds format works fine so far, no problems to report there.

when i try to import 3ds meshes from outside irredit to use in my custome worlds it imports fine. excemt the color and texture is blank. and if i try to add a texture it adds one bland solid color. wth?
Scott
Quote
2007-05-15 19:52:00

- .3ds is suck, (again, no smoothing, and if textures are included in file it might crash some progs, check blender.org website for more info)

- FOG! Check to see if the fog is turned on, IrrEdits fog settings are set to "White Pea Soup"

- Lighting? did you put a light into your scene? Check the default lighting color in your attributes for the root node, might need to change that too

- Texture Mapping: I find that the mapping is better done outside of Irredit, it's far less confusing. (I use Milkshape 3d for most of my texture mapping and animating.)