I just checked in some modifications to the Irrlicht Engine source which will make it possible for irrEdit, the free world editor to place and edit the parameters of terrain scene nodes. This doesn't mean that editing terrain heightmaps will be possible, but placing and adjusting terrain scene node parameters is already a big step forward, because a lot of games are using terrain heightmaps instead of meshes. Here's a shot: 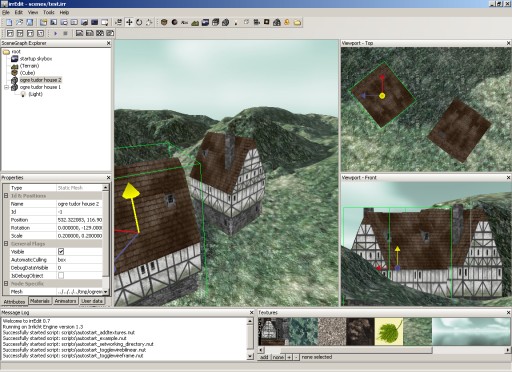 (Yep, that tudor house model is borrowed ;) )
And as you can see, irrEdit is running again. I finally finished refactoring the whole irrEdit application, and mostly everything works now. Software based global illumination is disabled currently (hardware based GI works) for example, but there is already an libIrrEdit.dll file which can be reused by plugins and games. Ah, yes, and irrEdit now supports plugins. With the next release, it will be possible to enhance irrEdit with own scene nodes, animators, and you will also be able to run and test your game directly inside irrEdit, with the scene you are working on. Other engines call this WYSIWYP (=what you see is what you play). I'm going to write some examples for this as well.
I hope to release all this in the next two weeks.

Cool. Niko, I would like to implement modeling inside your application. One year ago, I used for this IrrlichtNX, but I never finished my project.

> you will also be able to run and test your game directly inside irrEdit
Great! I really like this feature! It's so useful.
(editing terrain heightmaps would be also so nice!)
stef_
Quote
2007-04-20 14:36:00

IrrEdit is back online. I like the WYSIWYP. Two weeks until its resealed. This will be the longest two weeks of my life.But i like the plugins idea. this will take some work of your hands niko ;)
leo
Quote
2007-04-21 16:07:00

Good news, I just can't wait to try out new editor :)
And what about that OpenGL rendering in irrEdit? I'm having trouble with one low-end video card and Direct3D, and software is kinda slow.
butz
Quote
2007-04-21 19:59:00

modelling over plugins: no, I think, not yet. The libIrrEdit.dll first will only provide access to some of the editors functions, like its built-in physics and scripting engine. Can also be used for your games. OpenGL won't be supported in this version, but hopefully in the next. And sure, you can make plugins on your own, there will be also two example plugins with full source.
niko
Quote
2007-04-23 17:31:00

Sounds awesome. How is the new built in physics going to play out in the next version of irrlicht? Is there going to be a standardized way of plugging in the major physics engines?
NoisyPerlin
Quote
2007-04-23 23:14:00

how does your global illumination system work?

do you render a view from every pixel position? if yes, what resolution do you use? how do you get the pixel brightness from the view? if the view points along the normal, what "up vector" do you use (what i mean is how the roll angle of that view gets determined)?

do you first do a direct lighting pass and then mix it with the global illumination pass? how?