One of the new features of the upcoming release of Irrlicht is the new Font tool, created by gaz. Personally, I really like it, not only because it was written in Irrlicht itself and uses its included graphical user interface: 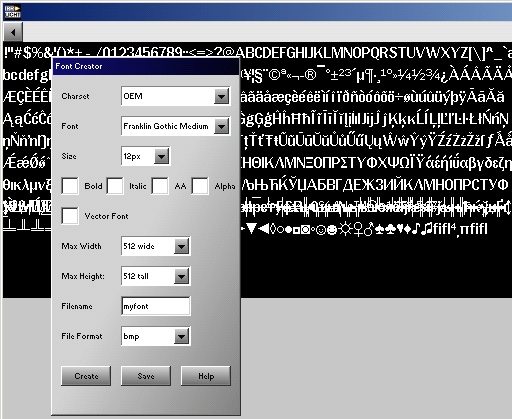 Since the first release, a lot of people where asking for a better font support, now you have it. Irrlicht will be able to use anti aliased, vector based, alpha channeled fonts as well as the old fonts consisting of just one single image file. Until now, it was difficult to use fonts with a character set other than ANSI, now it won't be a problem anymore. Great.

I think the GUI system needs to be enhaced, bad use of gradients, very BAD use :)
Still the controls have a weird behavior, for example, if you click a button, its state doesnt change if you move the pointer out, then if you release the mouse button it still recognizes it as a OnClick!!!!
trunks14
Quote
2007-03-13 16:47:00

The font tool has some problems with right-to-left characters at the moment, as you can see by the screenshot they overwrite the letters before them. Currently there's no CGUIVectorFont support in the engine, the purpose of vector fonts was to replace Chinese fonts which take 60mb of graphics memory at the smallest size, but since there's no support for multi-byte characters (yet) it's kind of useless for this purpose.

Regarding the skins, gradients are part of the built-in skins, which can be replaced by your own skin implementation if you like. As an example of this, there's a texture based skin in the forums which works pretty well. Midnight has updated it to work with the new IGUISkin interface and tested it with the GUI editor, the results look pretty good (apart from the draw2dimage clipping bug). I'd like to update skins so that they decide if an area clickable, so areas with holes in them would be possible.

Tom fixed the button click thing and I updated checkboxes to work the same way. The GUI is getting better but it still has a long way to go before it's complete!
gaz
Quote
2007-03-13 20:16:00