Irrlicht and irrKlang for Java

Take a look at the image below: It shows one of the interactive demos of Irrlicht (btw, need to make a better looking one soon) which comes with the SDK. You can walk around and shoot fireballs. The demo also has sound (fireballs) and music (by Markus Rohde). 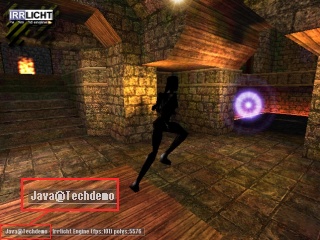 The cool part of this: This is not the original C++ demo, but the demo rewritten in Java, using jirr. Jirr has just been released in a new version by Stefan Dingfelder, supporting Irrlicht 1.2 as well as irrKlang 0.5. That's very cool. And this means irrKlang already is available to be used in 4 languages: C++, C, FreeBasic and Java. (And before anyone asks, yep, I'm working on the irrKlang.NET port, adding languages such as C# and VisualBasic.NET).

i don't think it will work as an applet since it isn't a complete java port of irrlicht. or am i wrong?

a 3d-engine comparable to irrlicht which runs as an applet would be very cool though. is there something like that? can opengl even be used in an applet without problems?
hugo
Quote
2007-03-06 15:52:00