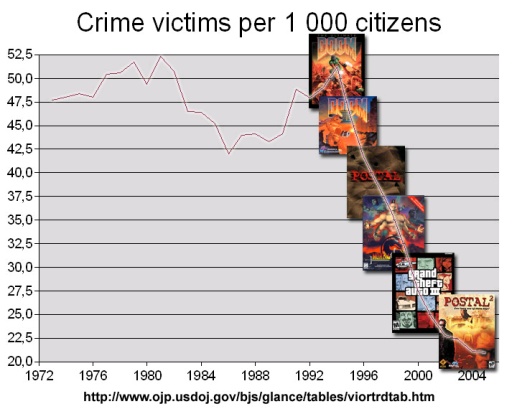 This is absolutely amazing. Something I always believed in, now proved by the numbers. You can actually channel your violence through videogames, making it absolutely unnecessary to express it IRL.
Hulshof
Quote
2007-02-27 19:09:00

just read an article in gamestar/dev, which said just the same (only refering an american statistic, but claiming the same for germany). but it's easier to blame computer games than to tell the people that they have to care for their children and give them attention...
Lino
Quote
2007-02-27 23:35:00

"So apparently Senator "______" is making the statement that if you let your kids play violent video games, when they grow up they will be violent adults. Thats funny because as a kid my dad let me eat donuts, but I never grew up and became a baker."
TSM
Quote
2007-02-28 16:57:00

I don't think you can compare videogames/violence and donuts/baker. It doesn't relate correctly. If every child who eats donuts becomes a baker, every child who plays video games would become a developer^^ And what about the guys that eat donuts while playing games Oo

And imho believing that games actually REDUCE crime is like believing in the Invisible Pink Unicorn to spoof other religions. It's as if you say "Okay, if german television/magazines/politicians only wants to see what they want to see, and just ignore many other important factors, then we can do just the same. Hehe."
Because there certainly ARE many other factors that reduce crime. ;)
But also factors that make children (and adults too) violent and aggressive.
DooFi
Quote
2007-02-28 17:05:00

Doofi- well yes its apples vs oranges, but still the graph does show that regardless of the advent of video games, specifically violent realistic ones, overall crime has been on a rapid and steady decline. So the question begs to be asked, What ACTUAL effect (if any) do video games have on the prevalance of crime. As far as I am aware no study with real scientific merit has been done to this effect. The "evidence" of video games causing violent behavior is AT BEST hearsay and a series of unsupportable extensions of coincidental circumstances. More likely it is simply a symptom of a generational gap where video games are not understood and in a way feared by the older generation.
buhatkj
Quote
2007-02-28 22:13:00