Last weekend, I started to port irrKlang to Linux. But as I already wrote my freshly set up Ubuntu wasn't very usable. So I invested 4-5 hours to configure everything for my needs, installed drivers and needed software until I really liked it. I was a bit surprised that afterwards I didn't really mind if I was working in Windows or Linux.
My desktop now looks like this: 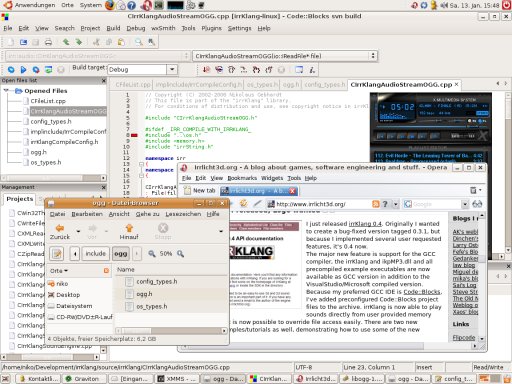 To summarize, only some very few installed software components made the difference between a comfortable environment and a crappy one: So I'm happy now again, time to start writing the Linux port.

yeh i like ubuntu too. btw, i think there is good mp3 support available in the multiverse repository, but it doesnt get installed by default because of patents on the mp3 algorithm/format.
buhatkj
Quote
2007-01-16 18:13:00

People complain that Linux distros don't support MP3 or video out of the box. In some cases neither does Windows - you still have to install codecs.
Mike
Quote
2007-01-16 18:18:00

Yay :-D This is a step in the right direction. I am currently using FC6 on my laptop, but if I could, I would probably install Ubuntu. I already wrote on my game's devblog (http://www.openrecon.org) that I will develop using and for Ubuntu (with Irrlicht as well :-D). Unfortunately, there isn't a Fedora 6 package for Code::Blocks as of this moment... so I will wait until I move to Ubuntu. Niko++ for teh multiplatform
RabidLockerGnome
Quote
2007-01-16 20:40:00

Finally irrKlang will get ported to linux... Once I feel irrklang runs on linux well enough I will merge it into a few of my hobby projects.
Good Work niko.
Just wondering will irrklang ever be open source? I would like to play around with it to see if I could get it to run on beos.
SkaCahToa
Quote
2007-01-17 00:14:00

Yeah Visual Studio is superb.I havent used linux yet :(. I still use windows. but ubuntu looks soo cool i will have to try it out soon.. plus one more thing instead of you doing double work by writing code for windows and then code for linux why dont you code with .NET (c#) and then run the app from linux and mac os x using mono (http://www.mono-project.com/Main_Page). that will save you time. which you can use to take your chic out for a movie :) unless you want to end up like this( http://labwax.googlepages.com/quality_time.jpg ) lol.
leo
Quote
2007-01-17 12:29:00

btw to add more ranting.. both xbox 360 and ps3 can run linux which means you can run irrlicht games on them thats if you have linux and mono on your console plus xbox 360 runs xna app which are mainly just .NET games that run on XNA instead of DirectX... anyhows the irrlichtnetcp project is just doing that ( http://irrlichtnetcp.sourceforge.net/ ) its actually really great.
leo
Quote
2007-01-17 13:19:00

Many free software fans don't like mono. Moreover, if Niko uses platform independent libraries, he dosen't have to write the code twice. Only minor changes are usually required.
Bubla
Quote
2007-01-17 13:30:00

Well, I wonder why Niko dosen't like Eclipse. Altough C:B is more lightweight and really closer to Visual studio, Eclipse is also very easy to use. I use it along with Intel compiler with Doxygen plugin and I am quite satisfied...
And I hope that irrEdit for Linux will be released a well!
Keep up the good work, Niko, thank you for improving the world.
Bubla
Quote
2007-01-17 13:34:00

eclipse is a bloated piece of crap ... too slow, too much memory usage. niko is right with using code::blocks, though it has its own quirks sometimes ;)

"Opera: Also my favorite browser, but I really had to install it because Firefox seems to be even slower in Linux than in Windows."
For me, Firefox is always better. On my PC at home it just works better, on my PC at work it's also a lot faster(this thing has only 256mb ram). I happen to use Opera here right now, though. ;)

I just lost my saved sessiondata for no reason. PC crashed when quitting Opera yesterday and now I couldn't choose "continue from last time". I had nothing left of my session.

I found a blablawhatever.bak-file somewhere and had to manually rename it to get at least an old version of my session back. I wonder how the average user would like that. ;)

There are a lot of nice extensions for FF, too. Adblocking doesn't work very well in Opera either.

"Its speed and especially memory usage is not even comparable to Opera if you ask me."

Ubuntu comes with FF2, btw. I wouldn't install that thing but it's ok, too. Better than Opera. :P

Honestly, I was glued to Flock on Linux because of the blog and picture addons, but since I just upgraded to Ubuntu (from FC6.. bleeechh), I decided to try FF again. FF2 is really great, and I think I prefer it over both Flock and Opera (which was much slower than FF for me).

Rhythmbox is very, very nice. I was using Banshee, but Rhythmbox seems faster to me. I also like the radio stations that came with it and Ubuntu :D

I do love simplicity, but Anjuta seems too simple to me. Code::Blocks is the best, but I wish the nightlies were more easily available in Ubuntu .debs, so I'm still using Anjuta :(. Upstart is the man, I have to say, bootups are about 1.5 times as fast now.

One thing I will say about Ubuntu is that the bright oranges sure do get ur attention when u start that puppy up.
RabidLockerGnome
Quote
2007-01-18 23:51:00