Irrlicht's software mode is good for something

As I wrote last time, my new linux installation doesn't work perfectly, and basically is not usable at all if you want to do work using 3D graphics. However, I simply took advantage of this situation and tried if Irrlicht would work with this at all. And it did: 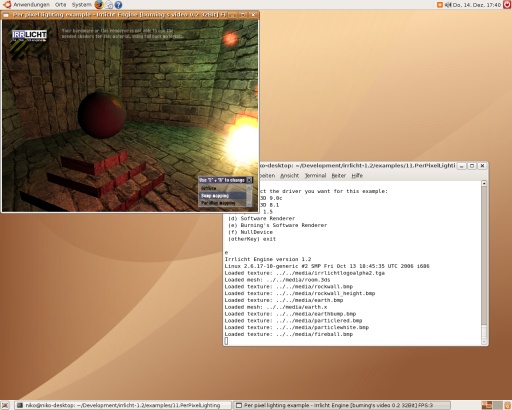 The software renderer was actually a little bit faster than with the OpenGL driver, wich ran but pretty slow of course. But ok, to be able to really work on the PC, I've got to install the ATI drivers. Or I could write an Linux irrKlang port first. Hm, let's see.

i guess i know what all people will tell you in the comments ;)
maybe you might want to use gentoo (www.gentoo.org) it's very very (and very again :D) hard to install but if you once got it, you can install nvidia-drivers for example just with one comment:
emerge nvidia-drivers
^^
gentoo is very nice cause you compile every package with your own cpu :) no binary-fuck :D^^
sanjin
Quote
2006-12-14 19:53:00

@sanjin, "no binary-f**k", that is why niko (and most of the world for that matter) don't keep it installed (or get it installed). Yes their may be a performance increase but I would rather have a 45 minute system install than 2 days compiling then dealing with driver issues. Windows is "plug and pray", but my god sometimes linux is, "plug, pray, curse, punch, kick, grab your ankles and take it."

While I admit that can be fun for a while :) I don't want to do it for every change to my PC or any time a new kernel and OS upgrade comes out. I use linux and AIX at work (Love AIX by the way) but when I am at home I just want to relax and play a game not fiddle with settings, compiling, etc.
TSM
Quote
2006-12-14 21:50:00

@sanjin : Advising Gentoo to someone who says Linux is *not user-friendly enough*... A bit weird, isn't it ?

Now about your last two posts Niko, I think "Not easy enough" is not the same as "Different from Windows".
You know, I gave Ubuntu to my mother and a friend of her, both never used any computer, and they had no problem at all. I can tell you that stuff like synaptics, OSes that avoid messages such as "Do you want to update this ? Do you want to update that ?" are much more user-friendly than Windows. What if I give them Windows ? Tons of CDs to install one driver, tons of background processes that waste your time asking you if you want to update this...
You're too used to Windows, using ".exe" files and stuff like that but I can tell you that for someone who never used any computer, Ubuntu is much more easy. But of course, as you used Windows for a long time, it's normal for you when something does not work on this OS to do this or that and it is not necessarily normal to go on a batch and type a human-understandable command...

I don't agree with treating bad linux:
I am not sure if without linux at all the opensource software of the last 10 years would have be written, and how many of you have learnt something reading GPL code?
As a programmer I will be always grateful to Linus and linux kernel developers.
stef_
Quote
2006-12-14 22:25:00

TMS: While I admit that can be fun for a while :
yes, i also wouldnt like to use it for more than 2 or 3 pcs.
but as a hobby-distro just 4 fun, its best for me.

DeusX: Advising Gentoo to someone who says Linux is not user-friendly enough... A bit weird, isn’t it ?
you didn't understand what i meant, did you ever install a gentoo system?
of course, the installation is very hard and i also mentioned that, but if you then want nvidia-drivers, you only need to type "emerge nvidia-drivers". portages does everything for you, thats very cool i think. btw. there is also a gui-installer for gentoo now.

The world of OS is simple.
Linux is for Programers(mostly hobbist).
Mac is for Artists(Graphic designers and the mix)
Windows is for the avarage PC User(basically everyone else).
It also makes sense for anybody making a serious program to use windows since it has like 90% of the market share on home PC users. Anyways everyone has a right to love what ever OS they want.
leo
Quote
2006-12-15 14:31:00

This is actually pretty sad. Niko has written a rendering engine with tens of thousands of lines of code, but he can't be bothered to spend an hour and google "ubuntu ati driver"? Or just search Ubuntu's wiki to and find this page: https://help.ubuntu.com/community/BinaryDriverHowto/ATI . You might even make up time by having a faster renderer. (does niko even read these?) The great thing about ubuntu is google will usually bring a quick set of instructions on how to do everything, and after a little bit you might even understand what they are doing ;).
Game_Ender
Quote
2006-12-16 05:32:00

@sanjin : This may be kind of offtopic but no I never tested Gentoo. What I meant is that... Everyone told me Gentoo is great (I'm about to change for such distribution) but kinda complicated. If you want nvidia drivers (or ATI), apt-get can do the same on Debian and stuff like Synaptics even have a GUI interface... Which one's the best to install nvidia drivers is a pointless question...
Thus I don't understand why changing if even the most user-friendly is not simple enough.

yes, you are right: apt-get can do the same
didn't thing of that
i can fully understand what you mean, there are so many distros nowadays that you mostly cannot know which one is right for you. you would have to try all of them.
sanjin
Quote
2006-12-16 18:05:00

I used Kubuntu, same as ubuntu but with KDE instead of Gnome. I had some trouble installing the ati drivers, it seems like you need some tweaking to get it to actually utilize the opengl.
BlindSide
Quote
2006-12-23 18:43:00