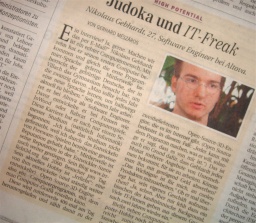 Looks like I am an IT-Freak. And Judoka. According to a big daily Austrian newspaper, diePresse.

If you bought that newspaper last weekend, maybe you've seen a short interview with me in it. If not, and you are interested, it has been published on their website as well so you can read it there, if you speak german at least. It was my first interview with a real newspaper, until now I only did interviews per email and with websites. It was fun, and also a bit strange, because the photographer took about dozens of pictures from me, only for that small picture in there.
The article itself is nice too, as far as I can tell. Some things written in there are not correct, but who cares. Hey, its an interview with me in a real, printed newspaper, and that's pretty cool. :)

Niko is in the news! And not as a criminal! Hurray for niko! Congratulations on such an amazing feat! If i was you rite now i wud be jumping up and down! But ofcourse if i was you my super genius brain wud be thinking about another amazing software that will help everybody!
RapchikProgramme
Quote
2006-10-02 19:21:00

The interview was a walk in the park, after a small piece of a large cake to come :)