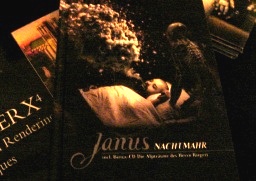 Yipee, I received the latest Janus Album named 'Nachtmahr' (german, nightmare) as present. Janus is one of my absolutely favourite bands, as I mentioned already once or twice on this blog. Not only the music of this album is great but also the package. It comes in a DVD box sized massive, heavy box holding 2 CDs and a thick bocklet, together with incredible beautiful pictures, some of them made by a graphic artist named irrlicht artwork, funnily. My box also has autographs from both band members on it.
It's difficult to find a name for the style of the music - at least I don't know one. Mostly it's piano, other classical and electronic instruments together with a male low strong voice singing to it. On previous CDs they mixed this with metal and others, but not on the 'Nachtmahr' CD. The topcis of the songs are this time mostly from WWII, for example about polish children fleeing in the beginning of the war, a girl surviving concentration camps, a former russian soldier returning to Stalingrad. But there are others as well, for example a song about animal experiments from the perspective of a dieing laboratory animal. Depressing topics, but definitively recommendable to listen too, especially in this form.

"Nachtmahr" isn't German - it sounds like some Dutch language or smthg. So the word is I think a third language (or a really badass dialect version of the normal word).
So in German: "Alptraum" and in English: "Nightmare".
Gauntlet
Quote
2006-09-16 01:32:00

"Nachmahr" is an old-fashioned german word meaning "Alptraum" or "nightmare" (English). In every-day's German language it is only rarely used - nevertheless: in fantasy-literature etc. when trying to imitate old-fashioned language it sometimes occures.
wolfgke
Quote
2006-09-18 11:44:00