Recently I wrote a lightmapper and included it into irrEdit, the Irrlicht Editor, but I didn't release it yet because it's still a toy. Several questions arised and I'm going to answer some of them here. But first, here's a shot of the light map generator in action: 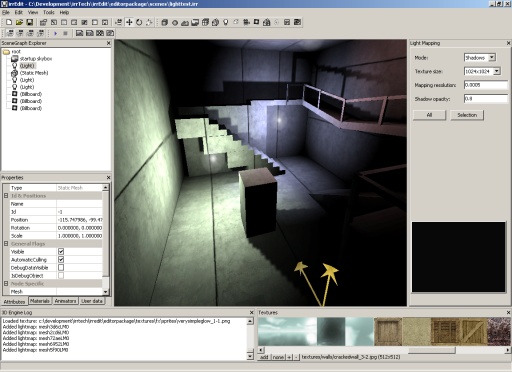 How does it work?

Simple. It generates a new mesh, with a new texture coordinate set and meshbuffers, and draws lightmap pixels onto the new textures. That's it.

How fast is it?

Quite fast. Needs about half a second for a small room with 3 point lights and shadows enabled as shown above. But I didn't test it out with huge levels and hundreds of lights yet.

Why is it that fast?

I don't know. I just wrote it. Maybe because it's still simple.

What lighting model are you using?

Simple diffuse direct lighting. Global illumination to be implemented later maybe, would be possible without a lot of changes.

How much until it is finished and usable and released?

Depends on how much work I've still to do with Irrlicht. A month, two months maybe.

I also integrated irrlicht into wxWidgets and am in process of rewriting some of your shaders to include specular component, and maybe have to rework the bump mapping to be done in tangent space so its invariant to vertex skinning. We might have a competition going on soon ;-)
Matthew Johnson
Quote
2006-08-04 20:10:00

Wow, looks great!
Maybe a wacky idea, but would it be possible to use this in the engine itself at some point?
It would seem to me as a very nice way to create shadows for light sources that do not move around fast/often, like the sun. or maybe generating a few lightmaps on the fly, to keep the download size of the game/app smaller.
Robin
Quote
2006-08-05 01:01:00

The lightmapper is great!! it can improve irrlicht graphic a lot. Do you use raytracing or scaline rastering?
P.S. If you don't release the next irrlicht version, we can't load .irr files
Mancuso Raffaele
Quote
2006-08-05 13:17:00