Scripting the Irrlicht Editor and some general explanations

I've added lots of new features to irrEdit. The most interesting is - as already hinted - scripting. I used Squirrel for this and implemented lots of useful functions and some classes, so it will be possible to create short scripts to simplify and to automate work with the editor, here is an example: 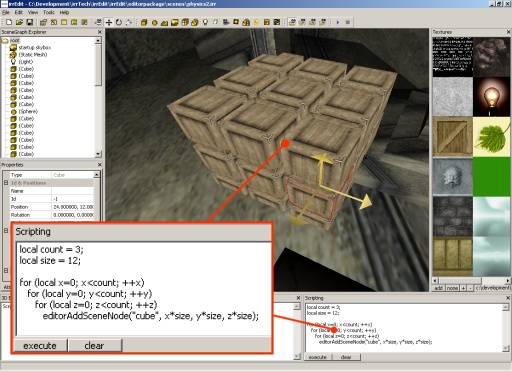 It will be possible to add such scripts as shortcuts into the menu and as tool bar icons. And later, it will also be possible to create mini games (such as enabling collision and a fps camera) and test them directly in the editor - call it rapid prototyping if you like. In addition I improved the speed of the editor - I am always using it in windowed mode and never realized that it gets a bit slow when moving scene nodes for example in maximized mode. This will all be in the next release of the editor - version 0.2.

But why all this? Why an editor? And am I still working on Irrlicht? I've received several mails of people asking this. Here is a short explanation: Sure, I am working on Irrlicht. Just check out the SVN server if you like, Bitplane and Hybrid are even more active. ;) I am creating this editor because lots of people asked for such a feature, but mainly also because I need it for a new feature I want to add to Irrlicht. Unfortunately there is currently no free good editor available which has the ability to create the data I need for this feature, so I started my own one. This will take a bit, but there is this nice side effect: A free new 3d scene editor, the .irr file format and a lot more to come. :)

Actually, that is something I am curious about as well... Will this be free as in "open source" or free as in "free binary download"?

don't get me wrong here, a free binary download with direct Irrlicht support the files it spits out is good news :) I'm more interested in the Irrlicht/wxWindows combination you have going... Source code for that alone would make me a happy chappy!

Either way - it looks really good.

@the source-question: give the irrEdit-page a look. there's written why it won't be open source for the next time. but another question: will it possible to add "custom objects" or to add "custom attributes" to scenenodes? so it would be easy to make kind of a entity-system (and it would be not that hard to implement in irrEdit, would do that but don't have the code ;) )

Wow, the speed you're implementing features with, is frightening. You're doing anything else beside programming lately?