I played around with Blender for some time, but I really can't stand its counterintuitive user interface. So I tried out anim8or, although it wasn't made for what I want to do with it - some simple indoor level geometry to use it in the Irrlicht Editor. I already used it to create the room.3ds file used in the Irrlicht examples, but this was years ago and it wasn't very complex either. After just a few minutes, I was able to create this: 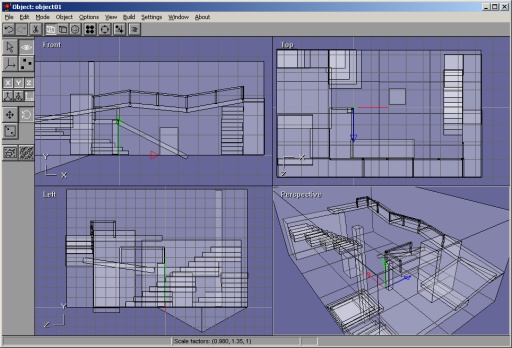 Ok, these are just some boxes pushed together in most cases, but it was very easy to do. I think I'll stay a bit with anim8or, nice little tool.

anim8or, dude is all about Maya Unlimited 7 www.alias.com

once you learn it and get over the intemedation that it can do anything (FFVII: Advent Children, Shrek, And every other 3d animated movie) then you learn and have the easiest best expeirence
fox
Quote
2006-07-04 20:10:00

One of the reasons why vim is so widely used. No other editor (save for emacs) is so powerful and efficient.
I got used to Blender eventually and like many of their interface ideas (like x, y, z, xx, yy, zz for constraining axes.)

yeh yknow i tried to learn blender too, and couldn't get anywhere with it. i mostly end up just using milkshape, but milkshape is severely hobbled by it's poly-limit and other things, lacking features, etc...
buhatkj
Quote
2006-07-04 21:50:00

No-one can learn all of a package. You can only ever be very familiar with bits of it. Being intuitive is what helps you use the bits you use less often. The 'everyone should learn the key shortcuts' argument is just an excuse, it doesn't hold water. No tool can get away with not being intuitive. I'm hoping Blender continues to make progress in addressing that (and they are doing it, for sure).
Steve
Quote
2006-07-04 23:56:00

http://www.equinox3d.com looks good but there is no windows version?!?

Yes, there is no windows version. I think it's just made it better. Fast, productive, free, and collada compatible. What else do you need :) I heard about rummors that there is a bootable cd image, and it's quite usefull for a windows user too...
Messen
Quote
2006-07-05 16:52:00

Nice to have some confirmation from others that Blender's interface really isn't all that. I've been told this by two artists I trust not to be picky and have had the same experience. However, suggesting such on the Blender development forums is the quickest way (aside from directly insulting a developer) to start a "heated discussion" (otherwise known as a "flame war")

I respect what Blender is (an open source alternative to what were until recently INCREDIBLY overpriced applications). However, without the financial impetus the commercial variants have - I believe that there is less need for the developers to listen to their detractors. After all, it works for them and is free (kinda hard to argue against that).

I think the upcoming changes beinig mentioned on the Blender dev forums (i.e. the configurable key bindings) will go a long way to fixing this. There are other flaws that have yet to be accepted as faulty by the developers though that will (in my opinion) still prevent most newcomers from getting up to speed quickly (e.g. what other program hides the settings in a pull-down panel hidden at the top of the screen and yet provides no menu access to said settings?)

I'll probably be flamed for this too, but hey - at least I'm in good company now :)

Why don´t you try SketchUp (http://sketchup.google.com) - it has a very intuitive UI and is very good for Sketichg up levels (sic!); and it´s free!

just lacks an importer - but that shouldn´t be a problem for irrlicht ;-)

Blender is not less. I have seen some of the commercial softwares. They are good but very expensive. I have done a lot in Blender. You can see my 3D Animations on my home page. There are 17 clips are ready for download and watch free.
kkrawal
Quote
2006-07-23 06:16:00