Recently I tried out the Prey demo. Prey is the new shooter created by Human Head studios and 3D Realms. (BTW: A nice theory about Duke Nukem Forever: it will be based on WinFS, which now has been delayed nearly as often as DNF, and this explains everything ;)] 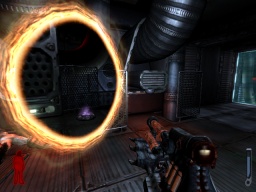 It seems to be using the Doom3 engine as game engine and looks pretty good, even when using not so up-to-date hardware like I do. Basically, it's just a first person shooter with the same old story: Aliens kidnapped your girl (plus your grandfather), and you've got to save her as well as mankind. (I made the last thing up because it wasn't revealed in the demo, but I bet the story will turn out like this, I would be surprised otherwise.) They've put some nice ideas into there, for example a scene where you are minimized to a few centimeters and may walk on a model of a planet which is just a bit bigger than you and has its center of gravity correctly in the center of the mini-planet. I have the vague impression that I've seen something like this in another game already, but I don't remember which, and it was fun anyway. The game also has other features like a ghost mode where you can leave your body as spirit and walk through energy barriers for example, gravity gangways and modificators which make you walk on walls and ceilings of rooms and portals, like - already described - Santostefano Giovanni recreated as Irrlicht addon.
After all, the demo was nice and entertaining. But I'm not going to buy that game. Why? It bored me nevertheless. Maybe I'm too old for ego shooters already. Maybe because it's a stupid shooter with some additional toy features and I've seen enough of them already.

There were dozens of shooters recently, and all of them bored me. But not Prey - I played the demo twice and I can't wait for the full game to be released!
Hm, the last full game I played until the end was MP2. So normally I'm really unsatisfied with the games released today.
But hopefully Nintendo Wii will make me satisfied again - can't wait for that!
Gauntlet
Quote
2006-06-28 20:37:00

"I have the vague impression that I've seen something like this in another game already, but I don't remember which, and it was fun anyway."

@andrew
Niko has complained in past posts about his english. When I notice something is wrong I try to help. I have ask him if he minded on several occasions and he said that it was not a big deal. When he lets me know it is annoying him I will stop.
TSM
Quote
2006-07-04 18:52:00