After some difficulties (technical and related to the good weather) here's a shot of a new feature I've built into the editor: 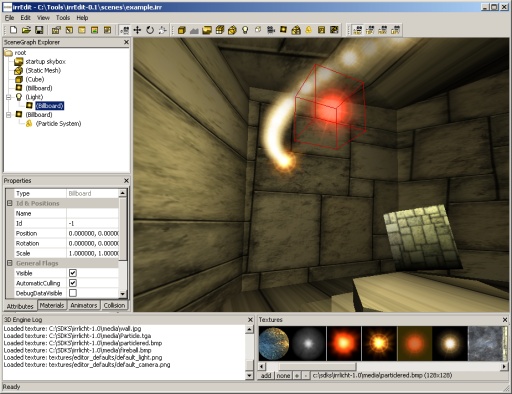 What you see here is a particle system attached to a rotating light, like in the per pixel lighting tutorial. This isn't possible in irredit 0.1 because it wasn't able to modify parent child relations. If you think more about it - it really is a joke to name irredit 0.1 a scene graph editor - until now it is rather a scene list editor. This will be better in irredit 0.2, it will be possible to drag nodes and attach them to different parents in the scene graph explorer then.

Looking better every time I see it! I'm still advocating adding an "IScene" class to Irrlicht. Purpose being, the SceneManager would only draw the activated scene, like a state manager almost, and it would allow you to have 3D in pause menu's or etc...
RabidLockerGnome
Quote
2006-06-26 19:46:00

Pausing is already possible, and multiple scenes too. I'm doing this with my small test project for example. Just try ISceneManager::createNewSceneManager and ITimer::setTime
niko
Quote
2006-06-28 20:08:00