Again, I made some very small progress with the editor I'm writing. It now looks like this: 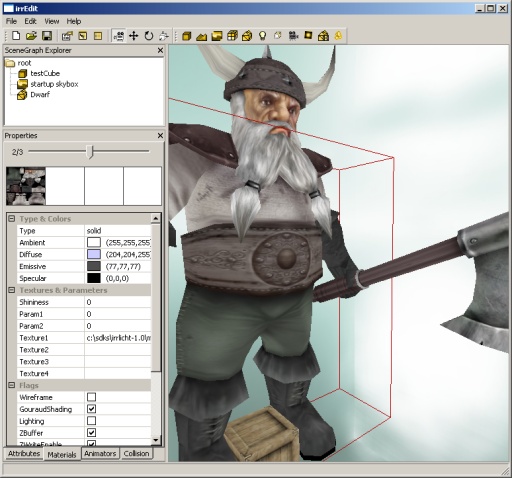 The most interesting new thing is the material editor tab to the left. It works just like the property window but has some additional features, for example a control which shows the 4 textures of the currently selected material parameter entry (an SMaterial structure for those familiar with Irrlicht). This new control is quite special: Because I didn't want to need to copy texture data from the 3D device into main memory, I simply draw that control using the 3D device. And in addition, I'm mixing drawing here with the GDI, the black border and the separators are drawn using the Windows graphics device interface, later I'm also going to show some text on it. I think some other editors are doing this in a similar way, for example Maya or the Unreal Level editor.

Just one Question on BilinearFilter, TrilinearFilter and AnisotropicFilter: why have these been implemented as booleans side-by-side? So what would be the effect if I set them all to 'true'? ...or do I have to set only one to true and the others to false?
Duncan Mac Leod
Quote
2006-05-24 00:43:00

I hope that all textures are holded by the engine, not by editor, because we have only 2 textures holded by node in current Irrlicht version.
etcaptor
Quote
2006-05-24 12:22:00

;)I just suppose that another two textures are for handling of bump/paralax mapping and detail mapping. Will be easy for user to get pointer to other two textures internaly by Irrlicht engine, not by the editor implementation only.
etcaptor
Quote
2006-05-25 04:20:00

No, the editor is just a frontend to the engine, so there will be 4 textures (at least) in the SMaterial soon. And if you need more than 4 this won't be a problem either via custom material renderers or scene nodes or however you want to implement it. :)
niko
Quote
2006-05-27 12:32:00

A stupid question perhaps, but what do you use to design your editor? Do you use one of the designers for WxWidgets, or do you handcode it all? I ask this because I've been looking into WxWidgets as well, but I hate handcoding GUI's. (Years of java torture at university. Don't ask. ;) )
BartK
Quote
2006-05-27 17:18:00

i love that idea of an open beta test ;) would be nice, too, to have a short glance on the source - would be VERY nice ;) at the moment i'm trying to write my own one, but if you would tell us, you will make the source open in a few weeks, i'll wait and use your editor as a starting point (working on a rpg-engine using irrlicht and coding xml by hand sucks ;) )
Lino
Quote
2006-05-29 15:20:00