This week I invested my time in one of my favorite tasks when creating GUI applications: Drawing icons. I absolutely suck as artist. So I sat down for several hours and drew about a dozen icons. I hope they are ok, but they could be improved for sure. They should represent some of the most important scene nodes of Irrlicht and appear in the toolbar, in the scene graph explorer, and I hope later in the menu as well: 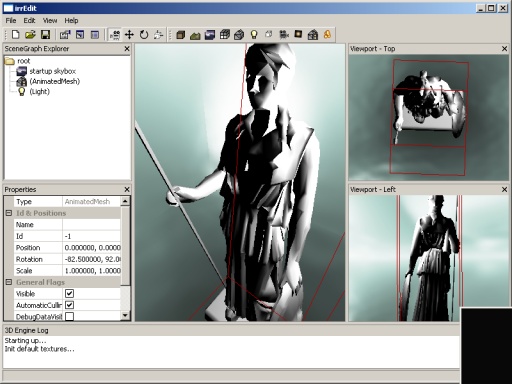 Other tasks completed this week are the creation of a scene node factory mechanism inside Irrlicht, making it easily possible to create all those scene node types at runtime (useful for the toolbar or when loading irrlicht scenes from files) and extend Irrlicht with new ones. And I added allocators - a long user demanded feature for all irrlicht template containers (I think I'll blog shortly about this in the next few days).
And today I thought about adding some more file importers. I know, Irrlicht already is capable of importing 12 different 3D file formats, but some users already contributed some new useful ones, and I would like to add one or two other popular formats. Or maybe improve the COLLADA loader a bit. Lets see.

I have added several new file formats in the past, hope you read about them. I have also two non-published, partially implemented loaders for old cinema4D and U3D (lacks the required implementation of compression only) here. Sources for the latter on request (just because they are not yet working ;-)
hybrid
Quote
2006-05-16 13:01:00

Thumbs up, matey! I've tried wxWidgets, but gave up after fighting with the compilers for hours without much success. Then I realize one needs to build wxWidgets before one can use it. Well, I tried the vs build file but it gave me so many errors it's not even funny. :( So, I had to resort to MS's .Net platform's windows form using VC++. I may become courageous in the future to try wxWidgets again. :|
lug
Quote
2006-05-16 15:33:00