Looks like I'm a perfect missionary, converted another soul to opera. Yay. But of course, that browser isn't perfect either. It's just software after all. And in this case, it is written in C++ and with Visual Studio, as I just 'discovered': 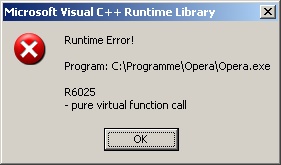 Yep, they can be tricky, those pure virtual methods. You really don't expect an objects vtable to change when it is destructed. Or who knows how they managed to create that bug.

I gave Opera an oportunity 3 or 4 months ago, and it's a great browser. But the new Beta is VERY unstable and pops error messages a lot. Hope they'll release the final version soon!
Miguel
Quote
2006-05-06 10:50:00

I loooove Opera, but it started to load for eternety sometimes, even though the websites all come up immediately in IE and Firefox... now I switched to Firefox. :( *cries*
Matthias
Quote
2006-05-06 13:33:00

I have been using the Opera 9beta for about a week. The widgets are just awesome, the speed great, the overall functionality lovely, but this browser is eating more memory than I could eat hot dogs.
After using it for 1h without closing (or even without heavy use, but the widgets running) it eats up to 200 mb. wtf?
With Firefox I noticed the same.. but not as heavy as Opera does.
Gauntlet
Quote
2006-05-06 13:43:00

in your project page for irrlicht you (niko) stated, in Irrlicht 0.15 (now 1.0), there will be PocketPC support via Apfelbaum's renderer. Am i wrong, or is this functionality missing?

I've been using Opera 90% of the time in the past. Firefox 7% and IE 3%. The newer version 8.5x seems to be way slower than before. I tried the "Delete data..." option (which I used regularly) and for some reason my HD started trashing really badly and Opera would not complete the cleaning. I had to kill the process for it to stop. :(

After that incident, I've started using Firefox more now. Then I discovered the joys of Firefox extensions (accuweather status bar; flashblock; adblock; noscript; fasterfox; tab mix plus crash session manager -- this is one of the best feature of Opera, being able to remember your session after you recover from a crash...no firefox can do it too; videodownloader a lot of sites doesn't work too well any more with this extension; flashgot; many more). :)