In Austria there are fixed opening hours for shops, enforced by law. I don't know the exact times, but usually shops only are open from about 9:00am until 7:00pm, and 9:00am until 5:00pm on saturdays, everything is closed on sundays. When I was on holiday in one of the lucky countries where such an over-regulation doesn't exist and was happy about being able to buy stuff at night and on sunday, a girl was surprised to hear this, was wondering how it would be to live like that and asked if we would need to take a day off to be able to go shopping. I remembered this conversation yesterday (sunday), when we were sqeezed together with about 1000 other people in a shop, trying to buy food: 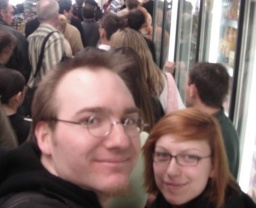 (The picture doesn't show this very well, but there are really really loooots of people. And - well, ok - we are not looking really scared of being squeezed to death soon because we thought it would be a good idea to look friendly on the last picture taken before our cruel and sudden exitus.)

There are exceptions to this opening hours regulation, and some few shops are allowed to be open, for example when they are in the vicinity of train stations. So for the whole city of vienna, there are about 5 or 6 shops open on sundays, and everybody will go there. The Billa shop shown above is one of these, and - thinking of Unreal: If you would drop a redeemer missle in there, you would easily get a few MoMoMooonsterKILLs. :)

> The Billa shop shown above is one of these, and - thinking of Unreal:
> If you would drop a redeemer missle in there, you would easily get a few
> MoMoMooonsterKILLs. :)

In Poland we don't have such problems. All shops are open till 10pm, and some of them (for example Tesco despite it is british) are open all night long... quite nice experience walking with cart thru the empty market at 3am :)
olej
Quote
2006-04-10 20:42:00

Niko, I am really looking forward to how the soccer world championship here in Germany will be. Although I have mixed feelings about this right now (a lot of party vs a lot of traffic jams, etc.), I know there's definitely one good thing to come: shops will be open on Sundays, too! Yay! (Not sure whether I can enjoy this if there are twice as many soccer fans around though...)
matt
Quote
2006-04-10 22:59:00

>Yes, this situation i had found in UK also.